The team competed against 15 other universities from across Canada.

Check out the video of the competition:  #REVEAL2013.

Congrats FDU! We raised $340 to help the Philippines with recovery efforts from the deadly Typhoon Haiyan.  The funds we raised will be matched by the Canadian Government.

A big thanks to David Rivera, the SGA and to Professor Concepcion for initiating the donation drive. 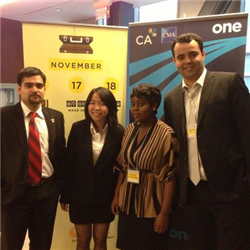 Congratulations to Thy Truong, Ruvimbo Mukorombindo, Tarun Khullar, and Ronaldo Martins who represented FDU-Vancouver at UBC’s Reveal Business Simulation Competition and finished in 3rd place out of 22 teams from across Canada. This is a great accomplishment for the students and for the Silberman College of Business.

A special thanks goes out to professor Ozen Asik-Dizdar for helping the students in preparation for the event.