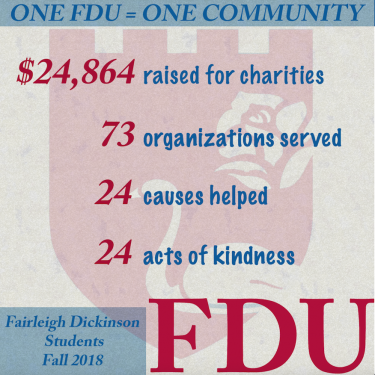 January 18, 2019 — Amid hundreds of pages read and dozens of papers written, Fairleigh Dickinson University students still found time to give back during the fall semester.

FDU students gave back this fall in more ways than one, using their free time to raise money for charities, volunteer in the local community, raise awareness about important causes and perform various acts of kindness.

The students at FDU’s Florham and Metropolitan campuses raised more than $24,864 for different charities and medical research causes. Of the money raised, $21,550 was donated to medical research foundations. They also volunteered at or served 73 different organizations, raised awareness for 24 causes and ran 24 different acts of kindness initiatives.

Here’s a full breakdown of how FDU made its mark this fall through giving back.

Thank you cards for: