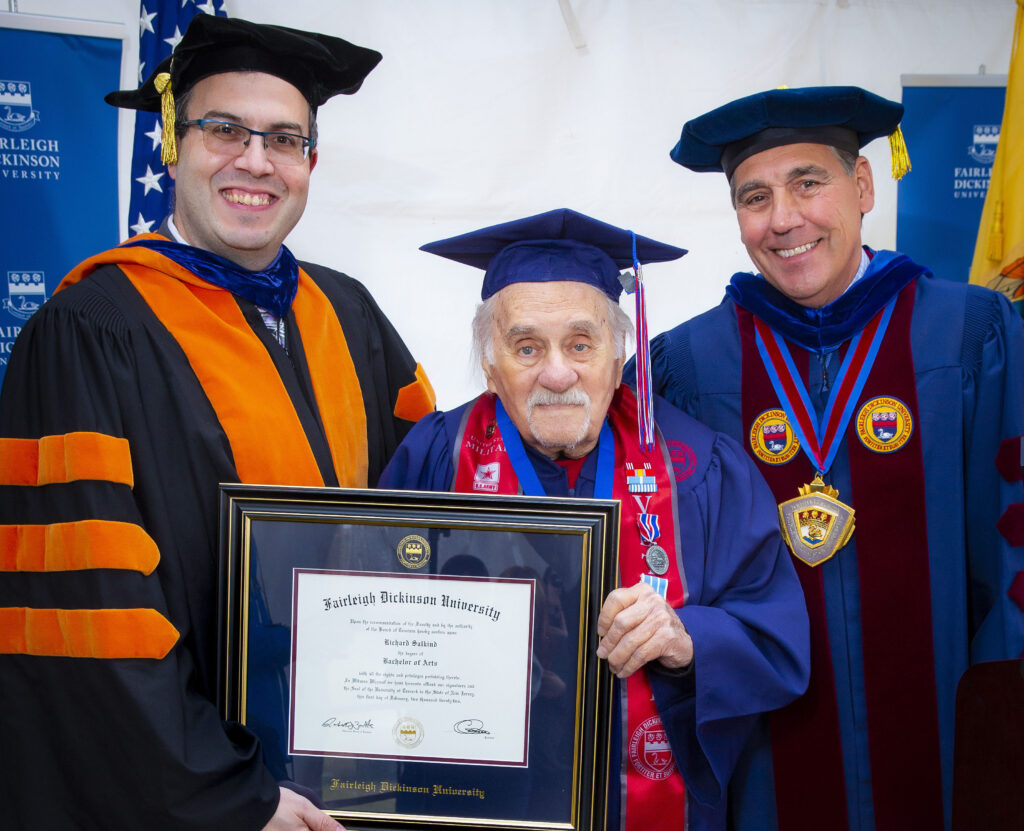 Seventy-one years after leaving college to enlist in the U.S. Army during the Korean War, 90-year-old Richard Salkind now has his diploma. At a special ceremony in front of Salkind’s home in Dumont, N.J., on March 30, FDU President Christopher A. Capuano and University Provost and Senior Vice President for Academic Affairs Michael Avaltroni awarded Salkind his Bachelor of Arts degree.

“We are very proud of our historical legacy of supporting veterans and proud to be among the most veteran-friendly universities in New Jersey. And today, we are especially proud to recognize this extraordinary veteran,” said President Capuano.

Along with family and friends, a number of other dignitaries were on hand to honor Salkind including elected officials and representatives from various military and veterans services organizations. 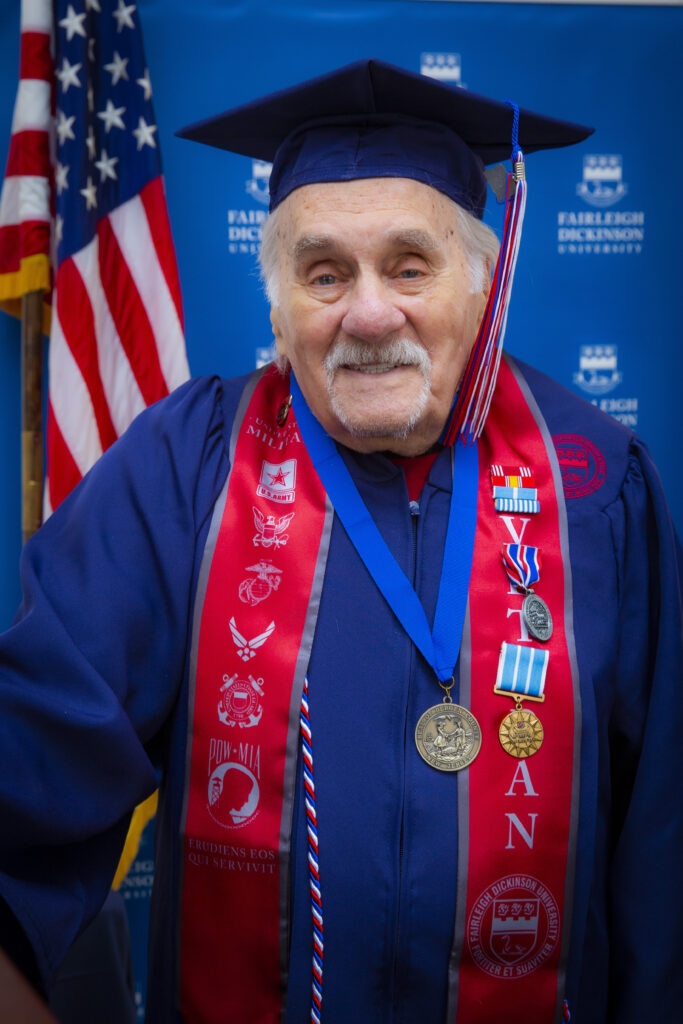 The new graduate proudly wears the medals of honor that were presented to him during the ceremony. (Photo: Roy Groething)

“I am in awe of this gathering,” Salkind said. “I have lived 90 years and never had the occasion to be honored like this. I have had ups and downs, joy and sorrow, and I have overcome everything, and here I am. I’d just like to say I love my family, I love my school and I love my country. With all my heart, I thank you all.”

Salkind left college mid-semester in 1951. Upon his return to the United States after the war, he married, raised five children and ran a successful trucking business. But he had some unfinished business — earning his college degree. Upon return from the war, he enrolled at Fairleigh Dickinson University’s Metropolitan (then named Teaneck-Hackensack) Campus and attended evening classes. Unfortunately, his commitments to his work and family made it difficult for him to complete his degree.

Years later, though, he knew he wanted to finish what he started. Just 14 credits shy of his bachelor’s requirements, he reached out to FDU recently and was referred to Frank Pantaleo, who advises students in the Bachelor of Arts in Individualized Studies program.

Provost Avaltroni said, “Frank, who is a Marine Corps veteran and proud FDU alumnus, was able to identify credits that were approved by the American Council on Education for Mr. Salkind’s army training. In fact, his training as a Morse Code Intercept Operator and Technician was determined to be worth 27 credits; more than sufficient to qualify him for his Bachelor of Arts degree in Individualized Studies.” 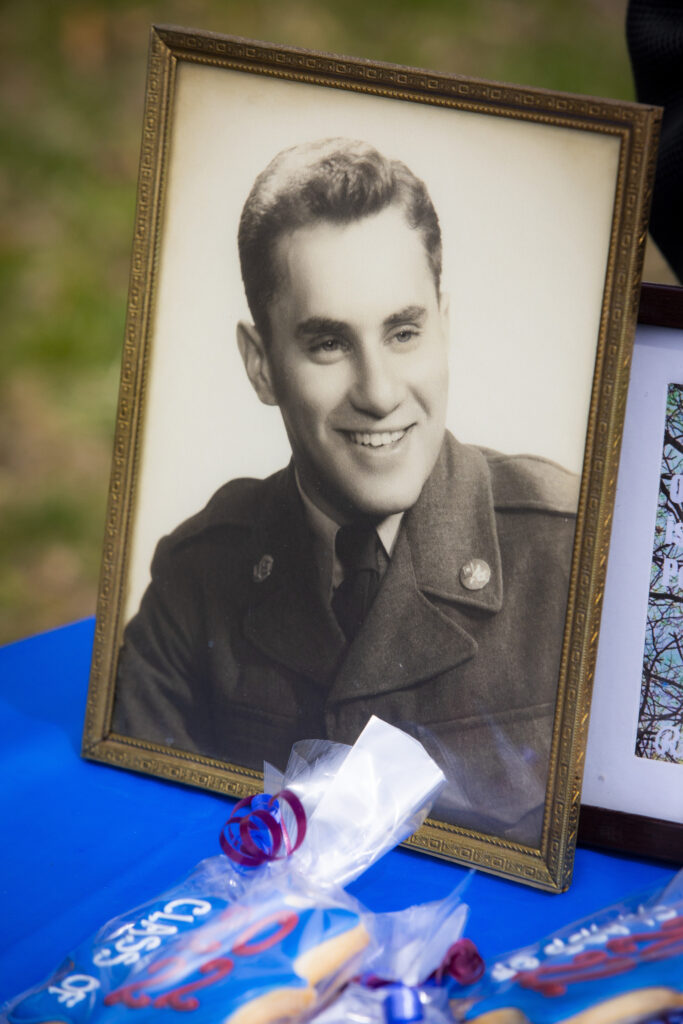 Among the many other honors presented to Salkind was a resolution from State Senator Holly Schepisi, who thanked him for his service and for “teaching the absolute definition of perseverance. You never gave up on your dream.”

Bergen County Board of Commissioners Chairwoman Tracy Zur presented a citation from the board. She thanked Salkind for his service and told him, “You inspire me. It’s not everyone who gets their own graduation ceremony.” She also thanked the University for its support of the nation’s veterans. 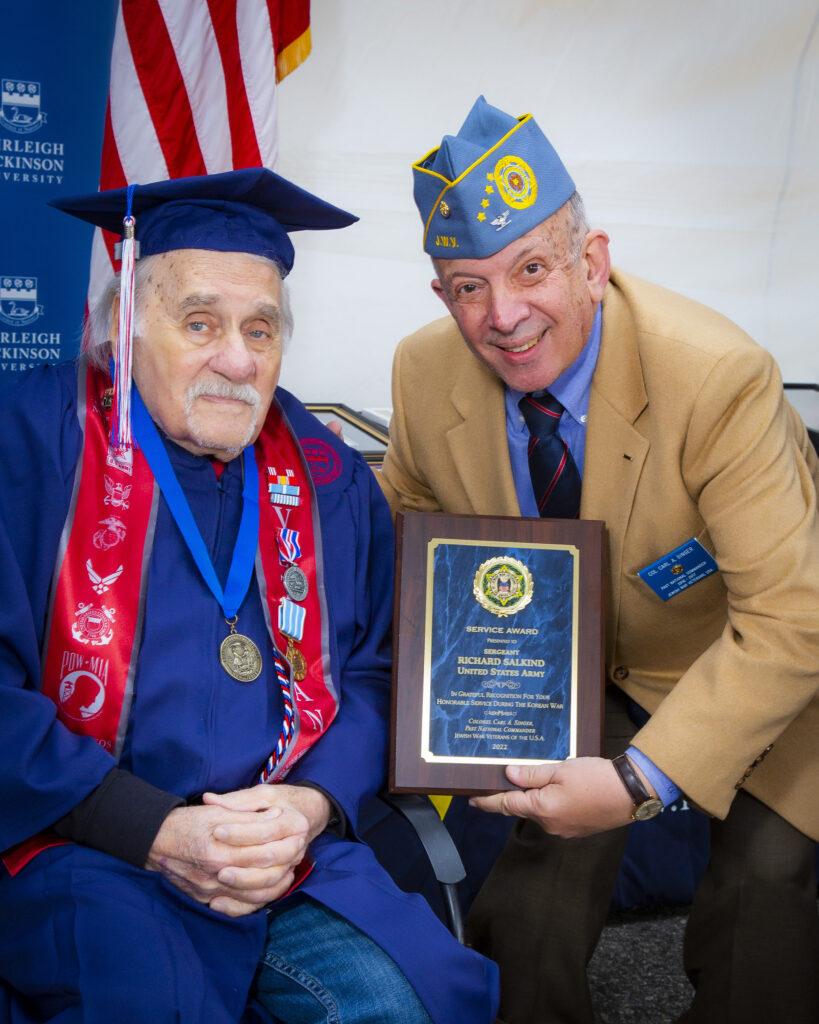 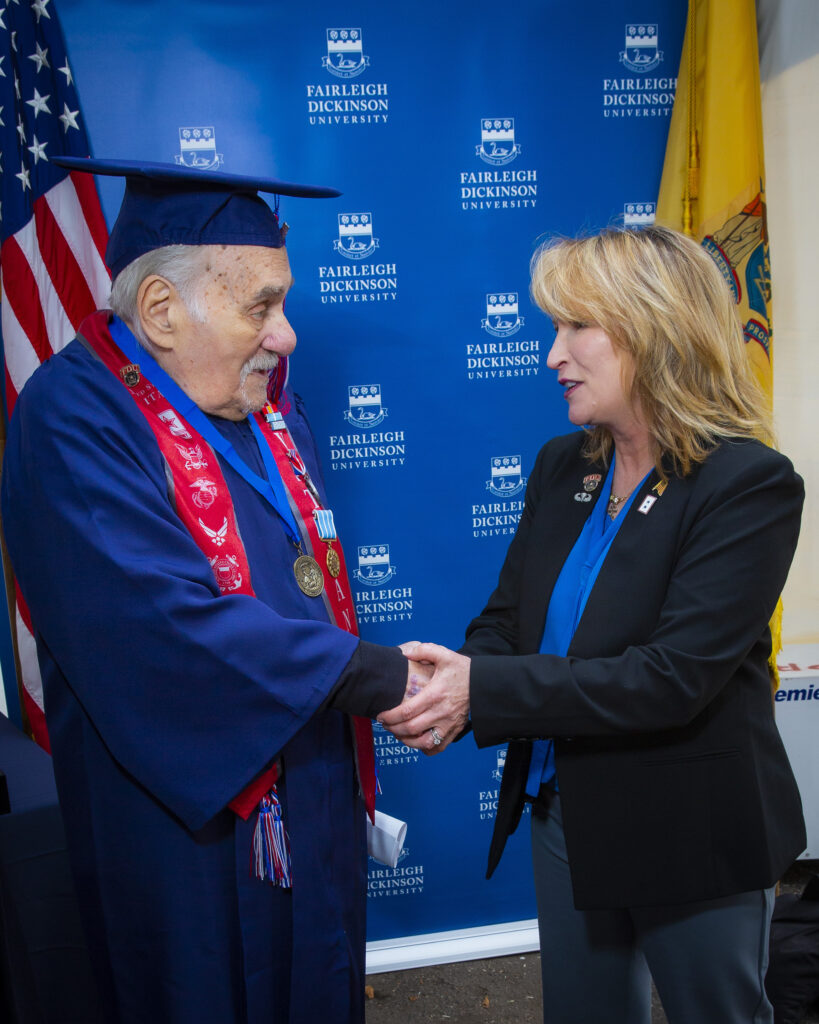 For more on this story

To view more photos of the event, go to our gallery.