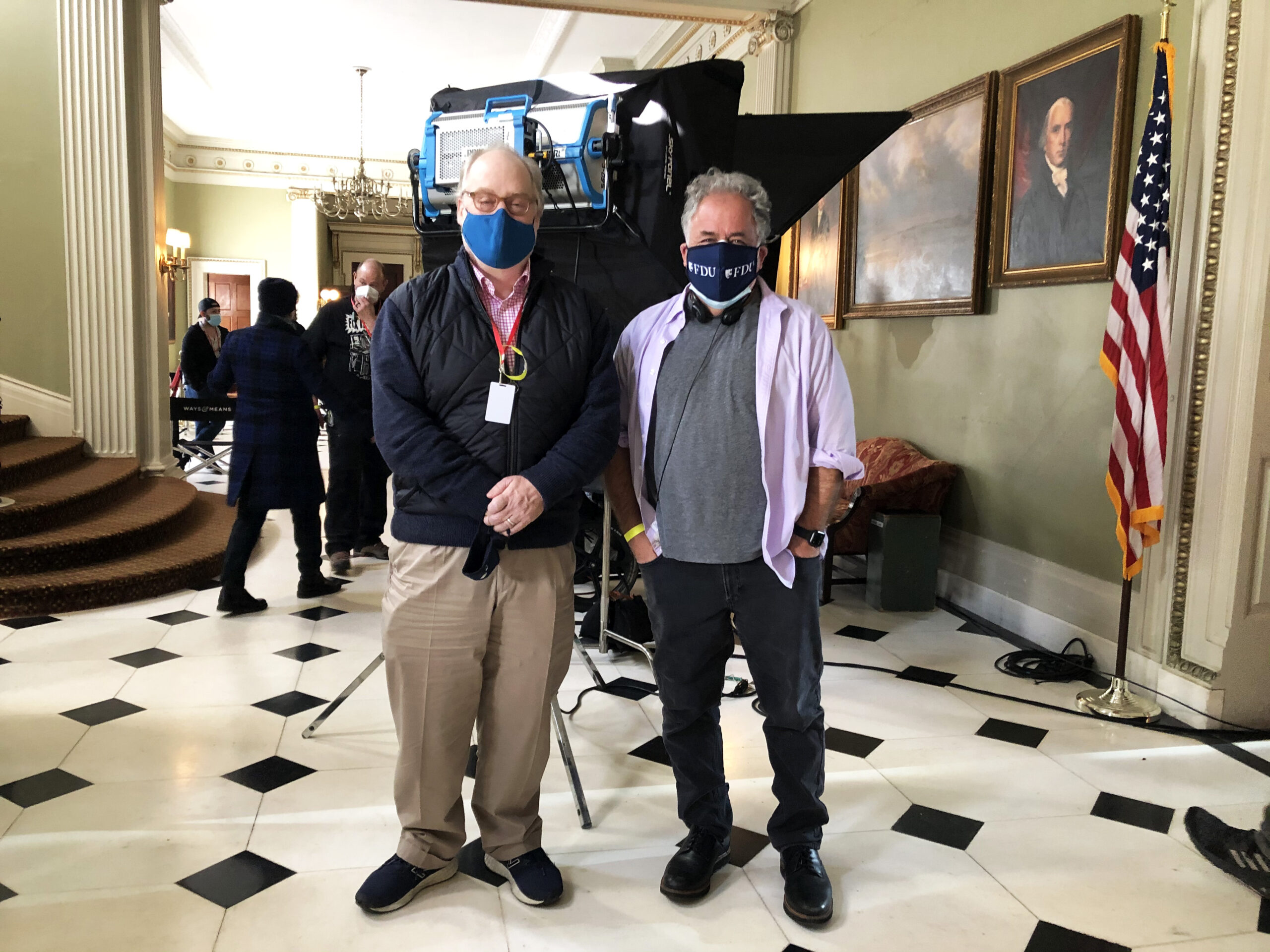 “Ways and Means” co-writers Mike Murphy and Ed Redlich in Hennessy Hall at FDU’s Florham Campus during the filming of the pilot episode.

The offices of University Provost Gillian Small and Maxwell Becton College of Arts and Sciences Dean Geoffrey Weinman, as well as the Codey Room, were completely remodeled to serve as film sets for the new CBS pilot “Ways and Means.”

The show focuses on the U.S. House of Representatives and stars Patrick Dempsey, known for his role as Derek Shepherd “McDreamy” in ABC’s “Grey’s Anatomy,” and Troian Bellisario of “Pretty Little Liars” fame. The cast also includes Academy Award nominee David Strathairn, Arlis Howard, Amanda Warren and Damian Young – who previously came to FDU for “The Trial of the Chicago 7.”

We sat down with the show’s co-writers Ed Redlich and Mike Murphy to discuss FDU as a film location, working with McDreamy, the television show writing process and more. 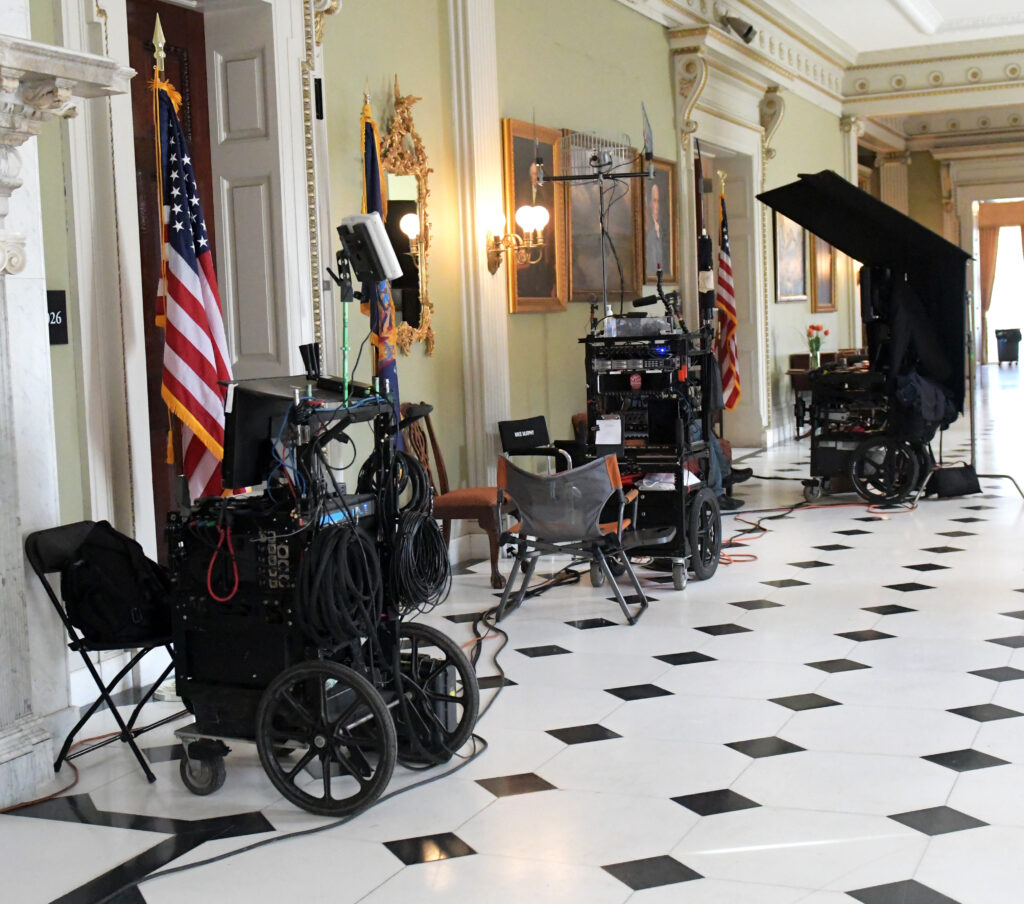 Why was Hennessy Hall (the mansion) chosen as a film location?

ER: It’s been very difficult to find locations that have the grand scale that we’ve found in Washington, D.C. It’s just impossible to film in D.C. right now for a number of reasons… and when the scouts came to Fairleigh Dickinson, there were just so many grand spaces and hallways… we felt like with our art department, we could recreate the Senate offices buildings in a way that looked realistic.

MM: In our world, you look for an intersection of architectural honesty, and even 10 percent better than the real thing for visual appeal, and production friendliness, and you guys were wonderful here working with our scouts. It’s just been wonderful and gives us the look we need with efficiency.

Why did you choose Patrick Dempsey “McDreamy” to be the show’s star?

Note: Dempsey plays the role of the Republican Whip in Congress. 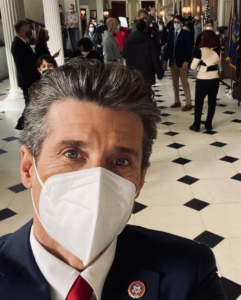 MM: Patrick has always been an astute follower of politics and he’s a huge television star. Originally when he first heard about it, I went and met with him and said we have this plan to kind of do a show that is not based on the immediate political reality, but has some of the same themes – everybody’s so dug in that they can’t get anything done. He really responded to the material and he’s contributed creatively to Ed and I as we wrote the pilot.

He has a big cancer charity in his home state of Maine, so he’s actually lobbied Congress, he has relationships with senators, so he’s kind of been an insider and that really appeals to him about the show. He just had one request, no stethoscopes!

ER: This is a different kind of part [for Patrick]. He’s playing the Republican Whip in Congress. It’s interesting to see what he can do. He came in the other day and just nailed this great scene – he had to do about a seven-minute speech dead on. He’s great, the camera loves him, he’s gorgeous and he can also act, which is fantastic.

Troian Bellisario (Pretty Little Liars) is another big name on the cast. What has it been like working with her?

Note: Bellisario plays the role of a young Democratic congresswoman from Wisconsin.

MM: She hasn’t had a bad take and we’ve been doing a lot. She’s just a machine.

What is “Ways and Means” about?

ER: The show Is really about Patrick’s character and Troian’s character trying to work together, but secretly, because the heads of both their parties will not look fondly on that.

MM: This show is not really red versus blue. It’s really about the kind of people that get elected to Congress, and the ways and means to get ahead and maybe even get something done.

ER: This is not a procedural show. There are no big “A” stories that end every week. The entire first season will probably be about trying to pass gun control legislation and everything that involves, with the political dramatics backstage.

MM: We’re not trying to divide the audience. We have a divided country… we’ve got good and bad Republicans, good and bad Democrats. A lot of the show is hope versus cynicism, and hope breaks out in Congress and God help us, actually catches on a little. 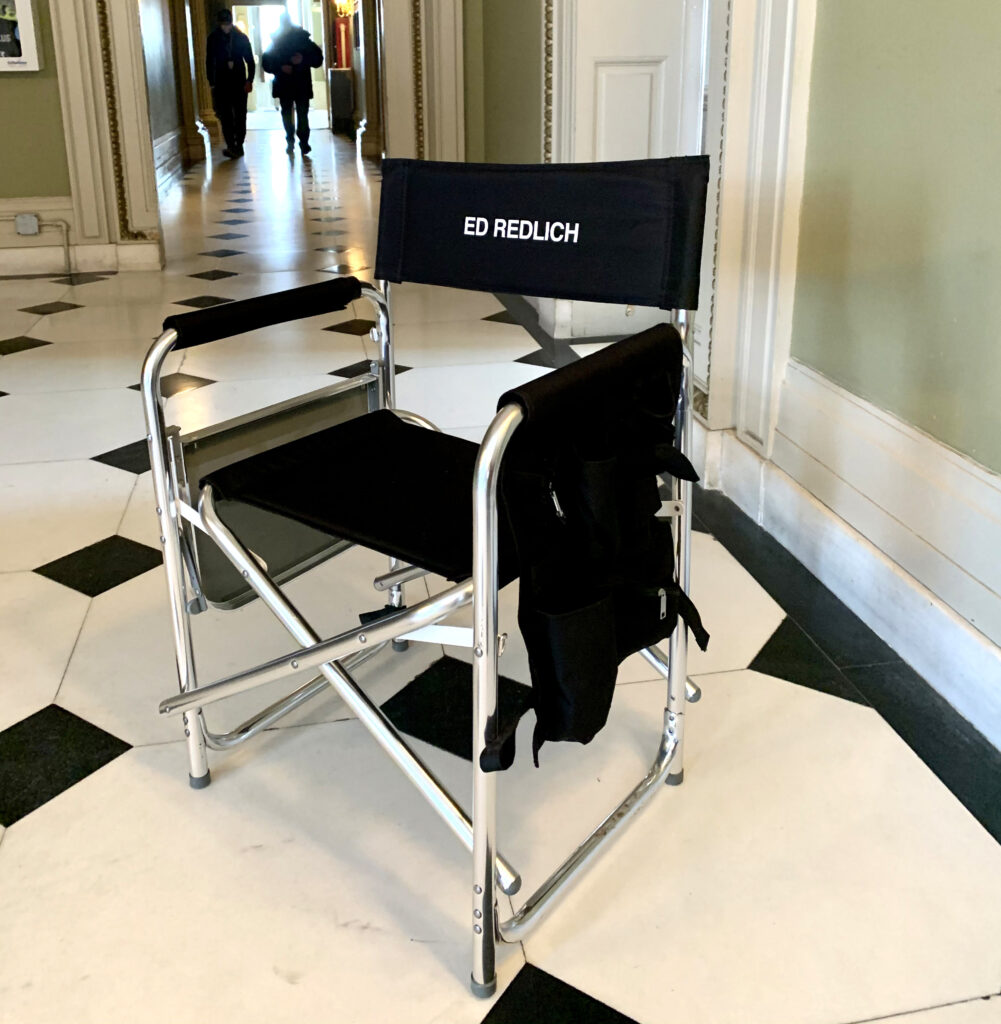 Note: Ed Redlich strongly identifies with the Democratic Party, while Mike Murphy has made a lifelong career as a Republican political consultant, advising politicians like John McCain, Jeb Bush and Arnold Schwarzenegger.

ER: We don’t do the thing you always see with one standing over the other.

MM: We did a little bit of that to write the story structure.

ER: But the scenes, we just trade-off. He’ll do one and then I’ll do one, and I’ll send it to him.

MM: We probably have 50 revisions between us, tweaking and cutting. Then we get notice from the network… then we do it again.

How will you address the COVID-19 pandemic in the show?

ER: COVID-19 is in the way background of our show. There are references to unemployment and businesses closures. It’s post-COVID-19 and slightly to the side… it’s post-Trump, but Trump’s name is never mentioned, but certainly the passions that have been aroused by him are in the show.