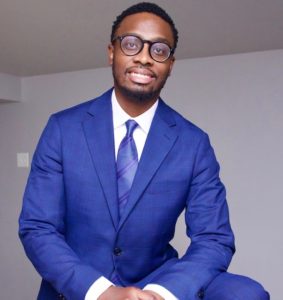 Now he’s the fund manager for a $500-billion company in Manhattan and controls the cash movement for a $9-billion entity within the company.

Being one of four raised by a single mother in a low-income household in Paterson, N.J., Stewart, an alumnus of Fairleigh Dickinson University’s Metropolitan Campus, never dreamed he’d land a six-figure salary job in New York City, N.Y.

“I thought it was a dream that was above me,” he says.

But FDU Silberman College of Business MBA graduate advisor Gina Murray didn’t. Her encouragement was what kept Stewart going. “I would often stop by Murray’s office to strategize and talk because I knew that she would give me encouraging words that would help me keep moving forward,” says Stewart.

Stewart relied on Murray’s support and his budding success at work in the fund administration space to stay motivated, but he also remembered that he was the only person who could create his success. “I’ve learned that although there are many people in life that are willing to push you in the right direction, you must decide to go out and work very hard every single day.”

This ability to persevere stemmed from Stewart’s upbringing. In spite of his family’s financial status, Stewart says he always knew that he wanted to go to college. With the help of scholarships and loans, he took the leap and was accepted into FDU.

Stewart held two or more jobs at a time throughout college, working as an accountant at his father-in-law’s accounting firm, a computer salesman at Best Buy and a cold-caller for a certified financial planner, to name a few of his early roles. This meant that Stewart was working around 60 hours every week, on top of full-time undergraduate coursework.

Again, Stewart persevered and graduated with a degree in finance in 2013. His girlfriend at the time, who is now his wife, encouraged him to apply to Prudential as a financial analyst, as well as to graduate school. He failed to make it into Prudential, but that failure led to a successful application to PNC, where he worked as a financial sales consultant. He was also accepted into the MBA program at FDU.

He eventually left his job at PNC to start working in the private equity fund industry, and after a promotion, was working as many as 80 hours a week. This took a toll on Stewart’s academic work, and that’s when he failed two classes, dropping his GPA to 2.6.

He needed to take nearly two more years of classes to finish with a 3.0 GPA, but thanks to Murray’s support and his own drive, he knew that he could bounce back. In 2018, he graduated with his MBA.

After being in the fund administration space for five years and holding five different positions, a recruiter reached out to him about entering a fund. Three weeks of interviews later and Stewart was a fund manager.

Now, Stewart wants to keep climbing. He hopes to enter a Ph.D. program, and is considering an adjunct professorship. He also dreams of leading a comprehensive business curriculum in private equity and real estate fund management. Five years from now, maybe he will create his own fund.

Stewart applied to a Ph.D. program at New York University and was turned down, but that isn’t stopping him. He implores current students to not let similar failures stop them, either. “Pressure is what makes diamonds and pressure is what teaches lessons — don’t be afraid to fail forward.”