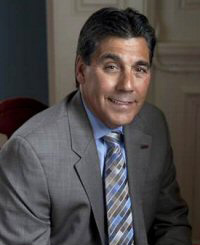 Christopher A. Capuano became the University’s eighth president on July 1, 2016. Capuano previously held a series of leadership positions at the University over a period of more than 25 years, most recently as University provost and senior vice president for academic affairs.

Under his presidency, the University has undergone a comprehensive strategic planning process that led to significant developments including the restructuring of colleges and schools and the creation of more centers of excellence, the launch of a historic capital campaign and key initiatives — including a major tuition reduction — that further the institution’s longstanding goals of fostering greater access and affordability and providing pathways toward upward social mobility for students from all walks of life. FDU has also recently gained widespread recognition both for the University in general and for many of its outstanding programs. These include for the first time reaching the Top 50 (currently #44) in the North region of the United States in the U.S. News & World Report’s collegiate rankings. With this foundation in place, the next phase of strategic planning is underway and promises to continue to enhance the value of an FDU degree, further distinguish its innovative programs and provide even more opportunities for students to transform their lives.

Prior to becoming president, Capuano as University provost and senior vice president for academic affairs provided important decision-making in forming a strong leadership team in the School of Pharmacy and Health Sciences, which resulted in consistent enrollment growth and full accreditation with the Accreditation Council for Pharmacy Education. In addition, he was instrumental in securing a large gift to support the University’s Daniel and Martina Lewis Center for Healthcare Innovation and Technology.

As director of the School of Psychology for nearly 15 years and a former doctoral faculty member in the University’s Ph.D. Program in Clinical Psychology and Psy.D. Program in School Psychology, Capuano provided important leadership in developing the school into one of the largest and more prestigious schools at the University. His many accomplishments in this position included establishment of the postdoctoral certificate program in clinical psychopharmacology and its transition to a postdoctoral Master of Science degree program — a program that has earned national recognition and is currently only one of just a few programs recognized by the American Psychological Association for postdoctoral training in clinical psychopharmacology.

As a former faculty member and biopsychologist by training, Capuano introduced and taught key compulsory courses in both doctoral programs in the School of Psychology. His research included the design, implementation and supervision of experiments in neuropsychopharmacology and health psychology.

Capuano earned his Ph.D. in biopsychology and two master’s degrees from the Graduate and University Center of the City University of New York, as well as his B.S. in biological sciences from Purdue University.

A national leader in enrollment management, Dr. Schultheis has over 20 years of experience in higher education as a faculty member, chair, dean, and senior administrator, following an initial career in the hospitality industry. He is known widely for his expertise in ensuring student success, particularly for underserved populations, and served as Vice President for the American Association of Collegiate Registrars and Admissions Officers from 2014 to 2017, where he served as inaugural chair of the Strategic Planning Committee for two years.

While at Virginia Commonwealth, Dr. Schultheis’ efforts led to significant increases in retention and graduation rates, increased degree production, stronger and more diverse undergraduate, graduate and professional enrollments, and revenue increases that were channeled back into student support and the academic enterprise. In addition, he successfully addressed disparities in student success, bridging the gap in graduation rates along racial/ethnic and socioeconomic lines. Concurrently, racial/ethnic minorities and Pell Grant recipients entered graduate and professional schools at higher rates than majority students within three years of earning their undergraduate degrees, an outcome that garnered national attention. His leading-edge work in applying microgrants to support student graduation led to him mentoring three universities on developing microgrant programs through the Association of Public Land Grant Universities–Urban Serving Universities.

Dr. Schultheis has presented at numerous national and regional conferences on enrollment management best practices over the past 15 years. Moreover, he has reviewed over 50 proposals for scholarly societies, and has authored numerous book chapters and journal articles on admissions and enrollment management. He is a member of the Editorial Review Board for Strategic Enrollment Management Quarterly and the Southern Association of Collegiate Registrars and Admissions Officers Journal, and has reviewed articles for the Journal of College Student Retention: Research, Theory and Practice.

Assistant to the President

Ms. Mazzolla joined the University in 1994 and previously held positions in the Office of International Affairs and School of Psychology.