FAR HILLS, NJ (October 26, 2020) – By a margin of more than two to one, New Jersey voters support investing in renewable energy projects like wind and solar — rather than building gas pipelines — to promote recovery from the economic damage resulting from COVID-19, the latest ReThink Energy NJ poll finds.

Asked which form of infrastructure to invest in to spur economic recovery, 62% prefer to “create jobs, improve our health by reducing pollution, and ultimately save consumers money,” through renewable energy projects, while 30% prefer to create jobs through pipelines that “ensure a reliable supply of inexpensive natural gas”.

The results are consistent with significantly strong preference for clean energy across the board. For example, when asked which is the energy source “most important to New Jersey’s energy future, 47% choose solar and only 21% pick gas. When support for offshore wind is included, 58% choose clean energy over fossil fuels.

“Despite facing unprecedented challenges from the COVID-19 pandemic, voter support for clean energy hasn’t waned and, in some respects, has become even stronger. And, when given a choice to base the state’s economic recovery on renewables or pipelines, clean energy was the clear winner by a two to one margin,” said Tom Gilbert, campaign director, ReThink Energy NJ and New Jersey Conservation Foundation.

“Support for renewable energy is at its highest level since we began the energy survey in 2015, with 80% of New Jerseyans indicating their support for the state’s goal to have 100% clean energy by 2050,” said Krista Jenkins, professor of politics and government and director of the FDU poll. “This, coupled with the data showing that half say they are more likely to vote for a candidate who favors renewables, sends a clear message to policymakers about the clean energy future New Jerseyans are seeking.”

New Jersey voters also show a similarly strong preference for the state’s plans to switch to clean energy versus the federal government’s commitment to push development of such fossil fuels as natural gas and oil: 60% say they strongly disagree or somewhat disagree with the federal government’s policy, compared to 36% who say they strongly or somewhat support the policy.

Asked if they favor or oppose New Jersey’s goal of achieving 100% clean energy by 2050, 80% say they strongly favor or favor the policy and 15% opposed or strongly oppose it.

In a very timely finding, this presidential election year, 50% of New Jersey voters say they would be more likely to support political candidates’ who favor moving from fossil fuels to renewable energy like solar or wind, 12% say it would make them less likely, and 34% say it would make no difference.

Other key findings from the ReThink NJ poll include:

The survey was conducted by live callers on both landlines and cellular phones between October 1 and October 10, 2020 with a scientifically selected random sample of 712 registered voters in New Jersey. Persons without a telephone could not be included in the random selection process. Respondents within a household are selected by asking randomly for the youngest adult currently available. The interview was conducted in English and included 212 adults reached on a landline phone and 500 adults reached on a cell phone, all acquired through random digit dialing. A listed sample was used of registered voters, and the source was Dynata.

All surveys are subject to sampling error, which is the expected probable difference between interviewing everyone in a population versus a scientific sampling drawn from that population. Sampling error should be adjusted to recognize the effect of weighting the data to better match the population. In this poll, the simple sampling error for 712 New Jersey registered voters is +/-4.5 percentage points (including the design effect) at a 95 percent confidence interval.

A complete description of the survey’s methodology, including weighting, question wording, and tables can be found here.

The survey was conducted by live callers on both landlines and cellular phones between October 1 through October 10, 2020 with a scientifically selected random sample of 712 New Jersey registered voters. Persons without a telephone could not be included in the random selection process. Respondents within a household are selected by asking randomly for the youngest adult currently available. The interview was conducted in English and included 212 adults reached on a landline phone and 500 adults reached on a cell phone, all acquired through random digit dialing.

The data were weighted to be representative of New Jersey registered voters. The weighting balanced sample demographics to target population parameters. The sample is balanced to match parameters for sex, age, education, region, race/ethnicity, phone use and number of adults in household. The benchmark distributions were derived from the October Statewide Survey weighted data filtered on registered voters.

The weighting balanced sample demographics to match target population benchmarks and was accomplished using SPSSINC RAKE, an SPSS extension module that simultaneously balances the distributions of all variables using the GENLOG procedure. Weights were trimmed to prevent individual interviews from having too much influence on survey estimates. The use of these weights in statistical analysis ensures that the demographic characteristics of the sample closely approximate the demographic characteristics of the target population.

Post-data collection statistical adjustments require analysis procedures that reflect departures from simple random sampling. We calculate the effects of these design features so that an appropriate adjustment can be incorporated into tests of statistical significance when using these data. The so-called “design effect” or deff represents the loss in statistical efficiency that results from a disproportionate sample design and systematic non-response. The total sample design effect for this study is 1.56.[1]

The survey’s margin of error is the largest 95% confidence interval for any estimated proportion based on the total sample—one around 50%. For example, the margin of error for the total sample is ±4.6 percentage points. This means that in 95 out every 100 samples using the same methodology, estimated proportions based on the entire sample will be no more than 4.6 percentage points away from their true values in the population. It is important to remember that sampling fluctuations are only one possible source of error in a survey estimate. Other sources, such as measurement error, may contribute additional error of greater or lesser magnitude.

Sampling error does not take into account other sources of variation inherent in public opinion studies, such as non-response, question wording, or context effects.

This telephone survey was fielded by Braun Research, Inc. with sample from Dynata. The research was funded by the New Jersey Conservation Foundation.

Q1. Which source do you think is most important to New Jersey’s energy future?

Q5. The federal government has recently been pushing for greater fossil fuel development, like oil and gas. Do you agree or disagree [rotate] with this energy policy? Would that be…

Q8. How do you rate the pace at which our state is working to reduce emissions that cause global warming? Would you say it is…

Q9. How would you describe your feelings toward the effects of climate change on New Jersey? Are you

Not at all concerned

Q10. Do you favor or oppose the development of wind energy off the coast of New Jersey?

Q11. There are several new natural gas pipelines proposed across the state.  How concerned are you, if at all, about their potential environmental effect on New Jersey? Are you…

Not at all concerned 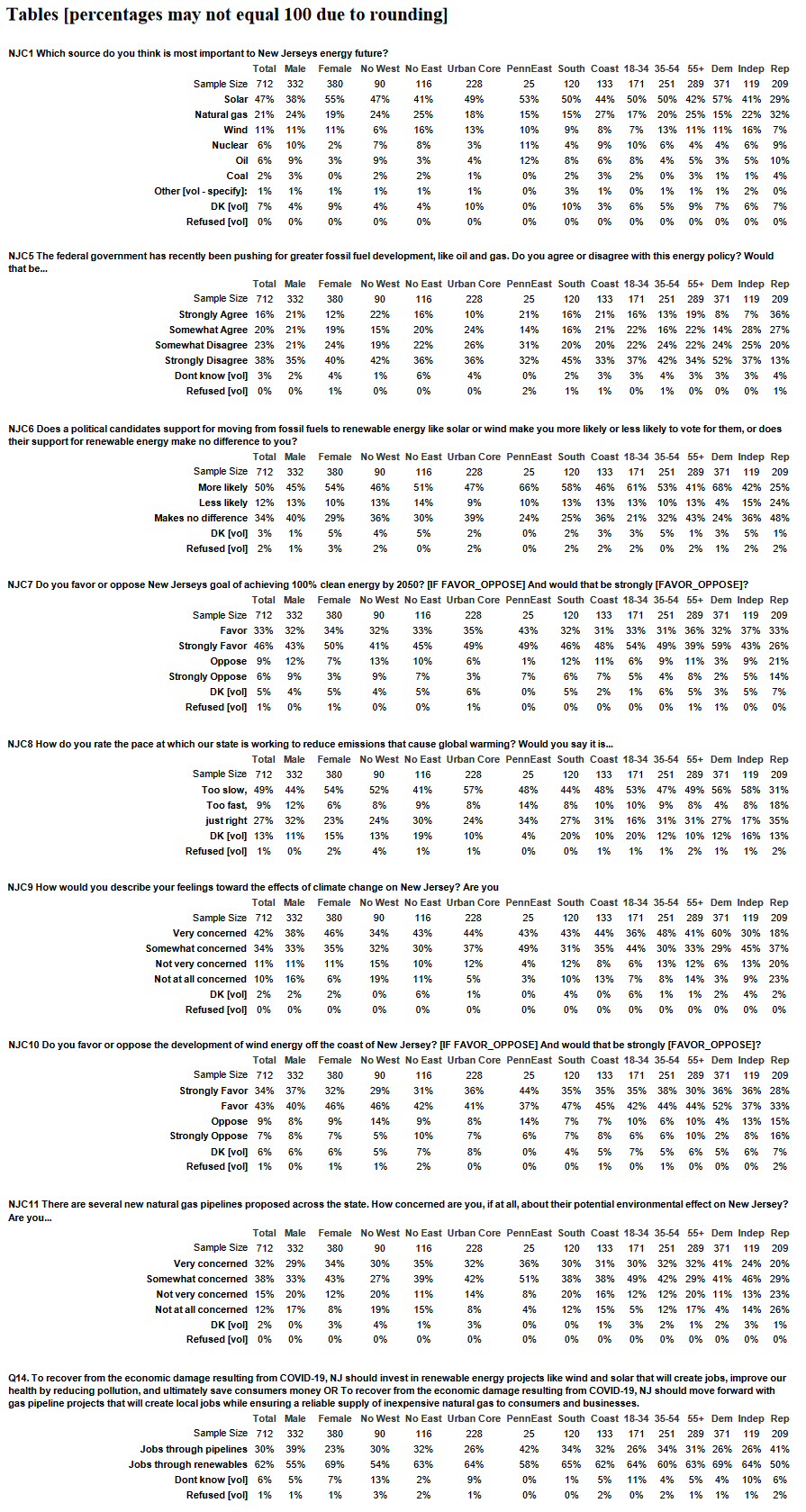 [1] The composite design effect for a sample of size n, with each case having a weight, , is computed as .