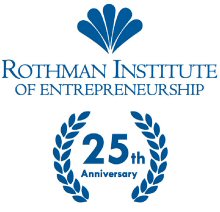 The Rothman Institute was founded in 1989 at the suggestion of real estate entrepreneur George Rothman, and made possible through a generous contribution by Mr. Rothman and his wife Phyllis.

One of the nation’s leading real estate developers, George Rothman had great insight into the importance of entrepreneurship to New Jersey’s economy. He also served on the University’s Board of Trustees from 1986 to 1992 and was awarded an honorary degree from FDU in 1991.

In recognition of the renowned business management researcher and theorist, the late Peter F. Drucker.

Kenneth Greene, Campus Provost, College at Florham, spoke about Peter Drucker, the world’s foremost pioneer of management theory, and he noted that his personal contribution to the field cannot be overstated. Ken stated that at the time of Drucker’s death in 2005, he had given a lifetime gift of his mind and insight to the study of management theory. His career as a writer, consultant and teacher spanned nearly 75 years. His groundbreaking work turned modern management theory into a serious discipline. He influenced or created nearly every facet of its application, including decentralization, privatization, innovation and entrepreneurship, empowerment and understanding of the knowledge worker.

Doris Drucker, wife of the late Peter Drucker and FDU alumna, then said a few kind words of thanks and noted how Peter loved nature and would appreciate the thoughtfulness of a tree planted in his name. Doris flew in from California to be present at the morning ceremony. She then remained on campus for the morning to talk to faculty and lecture to an undergraduate entrepreneurship class.

James Barrood, Executive Director of the Rothman Institute, concluded the morning by saying that this purple leaf plum tree would serve as inspiration for the staff and faculty at the Institute, business school and University as we strive to continue being the innovators and entrepreneurs that Peter recognized in his book, Innovation and Entrepreneurship: Practice and Principles. In this book, he noted that Fairleigh Dickinson was one of only a few academic innovators after WWII. 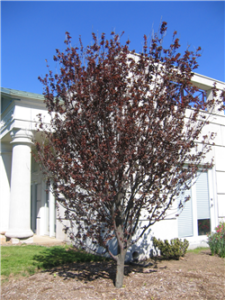 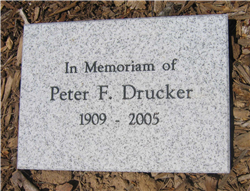