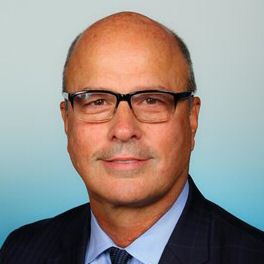 In 2018-19, Greg Herenda completed his sixth season at the helm of the Fairleigh Dickinson men’s basketball program.

This season, the Knights (21-14) made history by winning the program’s first-ever NCAA Tournament game, defeating Prairie View A&M in the First Four round The 2019 Knights captured a share of the NEC Championship for the first time since 2006 and enjoyed their fourth consecutive .500 or better season in NEC play as Herenda led the team to a 12-6 conference mark. With 21 total wins, the Burgundy and Blue registered the fifth-highest win total in program history.

Herenda, who registered career win No. 200 on February 23, 2019, against Wagner, guided the Knights back to the NEC Championship for the second time in his six seasons by earning wins over Wagner (84-46) and Robert Morris (66-62). Herenda improved to 7-3 all-time in NEC postseason games and boasts a perfect 4-0 mark at home.

Throughout Herenda’s time at FDU he has maintained a strong relationship with the Boys and Girls Club of Hackensack/Lodi. He has also worked hard to develop relationships with alumni and in association with an alumni commitment he began the Revitalization of the Alumni Basketball Suite in the Rothman Center.

Herenda, who is a native of North Bergen, N.J. and played for legendary coach Jerome Halligan at St. Peter’s Prep in Jersey City, N.J. has a coaching path that has taken him to the Big East, Conference USA, the Ivy League and the Patriot League through the years and his teams have won multiple conference championships, as well as appearing in both the NCAA and NIT Tournaments.

In 2008, Herenda took over at UMass Lowell, inheriting a 12-win squad from the year before. In his first season, he was named the Northeast Conference-10 and NABC East Region Coach of the Year after leading the Division II school to a 21-8 record, which started a stretch of three straight 20-win seasons and four straight trips to the NCAA Tournament. Before leading UMass Lowell, Herenda was the head coach at Cabrini College for one season (2007-08), Division III school in Radnor, Pa. Herenda started his head coaching career at Elgin Community College in Elgin. Ill., in 2006.

A four-year player at Merrimack, Herenda still holds the school record for assists in a game (22) and shares the record for the single-season average (9.0).

Herenda earned his Bachelor’s Degree in Business Administration and Marketing from Merrimack College. He currently resides in Bergen County with his wife, Jillene, and his son Trey.