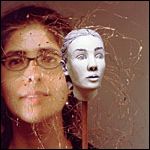 She has lectured extensively at museums and universities, and taught at Rhode Island School of Design, New York University, Hunter College. Her artist residencies include the Art Institute of Chicago, RISD and Cranbrook. She received her BFA from Tyler School of Art and her MFA from New York State College of Ceramics, Alfred University. For additional information go to www.judymoonelis.com.

“Whether single works or multipart installations, the intricate human body provides the conceptual focus for my artistic practice. Historic and contemporary anatomical studies often supply a visual groundwork including the structures and processes of the brain, respiratory, circulatory, nervous and sensory systems. Content ranges from current issues such as the teaching of evolution (“Evolutionary Wall”) to environmental concerns (“Hudson Blood Lines”), brain research (“Brain Cell”, “Memory Vault” and “Mirror Neuron Strands”) and the interconnections between living species (“Wonder”). Recent historic site projects relate the human body with architectural features of the site and include the abandoned Eastern State Penitentiary in Philadelphia (“Blood Cell” and “Brain Cell”), and the Kehila Kedosha Janina Synagogue in NYC (“Celestial Structures”). My discreet gallery-based works deal with more specific singular subjects such as breath (“Inversion”) or the sense of touch.” 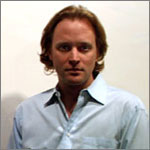 George Cochrane lives and paints in New York City and has exhibited internationally in gallery and museum shows. Since 2008 Cochrane has been at work on his autobiographical Graphic Novel entitled Long Time Gone. In 2009-2010 he exhibited the original artworks at the Massachusetts Museum of Contemporary Art in North Adams, MA and at the Tweed Museum of Art in Duluth, Minnesota. Each of the four completed chapters of his Graphic Novel in-progress has been published and is currently being reprinted. Cochrane has also created Artist Books and oil paintings related to Long Time Gone. In 2013, one painting inspired by pages from the second chapter was auctioned at a benefit for the Non-Objectif Sud gallery in New York City. Previously Cochrane exhibited large-scale drawings at the Repetti Gallery in Long Island City, New York and paintings in “Contemporary New York,” at the J. Johnson Gallery in Jacksonville Beach, Florida. He has also exhibited at the Guild Hall Museum, East Hampton, New York, at the Marin Kudlek Gallerie in Cologne, Germany and at Momenta Arts in Brooklyn NY. His paintings have been featured in exhibitions at the New York Horticultural Society in New York City and General Electric Corporate Headquarters in Fairfield, Connecticut. He has lived and studied extensively abroad and brings a range of knowledge of traditional painting and drawing techniques. In addition to experience in Museum and Contemporary Art Galleries, he has worked closely with leading artists in New York. For additional information go to www.georgecochrane.net.

“My autobiographical Graphic Novel Long Time Gone represents the culmination of my artistic interests to date. The book is a tale of one day in my life, told in 24 chapters with each chapter representing an hour of time. The work is modeled on Homer’s Odyssey (an adventure told in 24 books) and James Joyce’s Ulysses (the Odyssey in a single day.) The Graphic Novel collects my disparate interests in one artwork – from the history of American Jazz and the music of Bob Dylan to canonical literature and the history of art and comics. In part, my creative process involves collaborating with my daughter on some of the pages, thus providing an alternate viewpoint in the story of our day. This long-term art project allows me to work in every manner of drawing and painting techniques imaginable, forever challenging me in new and different ways.”

Each year we bring internationally known artists to visit the Madison campus. These popular demonstrations and lectures in our art studios have recently included:

Our special programs enhance the learning environment and offer continuous support to current students and alum. These include graduate teaching fellows, artists in residence, and teaching assistants who create their own artwork in the studios, inspire with their advanced abilities, and mentor students.