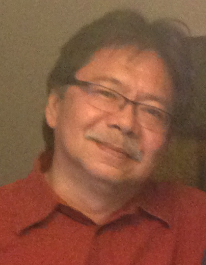 Assistant Professor of Computer Graphics, School of the Arts

John Cinco is an artist, graphic designer, and educator. He started exploring 2D and 3D graphics while pursuing his MFA in Computer Art at the School of Visual Arts. Previously, his background in fine art focused on alternative media that encompassed drawings, prints, collages, assemblages, mixed media paintings, and even set design that used vines culled from a forest.

Ironically, John’s work made a 180-degree turn to high technology after entering the MFA in Computer Art program at the School of Visual Arts. Nonetheless, his work with 2D and 3D graphics software extended his fascination with creativity and its myriad applications in the visual arts. He is presently investigating aleatory processes with found images in digital art-making, extending an overarching concern he has had with non-conventional media.

His works have been shown in one-person and group exhibitions at the Cultural Center of the Philippines, the Kyoto Municipal Museum of Art, the Shijo Gallery in Kyoto, the Philippine Center in New York, the George Segal Gallery at Montclair State University, the School of Visual Arts Westside Gallery, the University of the Philippines Fine Arts Gallery, and a host of other venues.

He has worked in the graphics and animation industry in New York City, including Nickelodeon Digital Animation Studios, Post-Perfect/Cyclotron, and Carbon Media. As an educator, he has taught at several institutions prior to FDU. He has also written exhibition reviews as a contributing writer for the Philippine Arts Supplement, a magazine published by the Contemporary Art Museum of the Cultural Center of the Philippines.

John has lived and studied in Japan on a non-degree research scholarship under the Japanese Ministry of Education, first at the Osaka University of Foreign Studies for language training and then at the Kyoto University of Art and Design for research studies.

His work can be seen at johncinco.com.