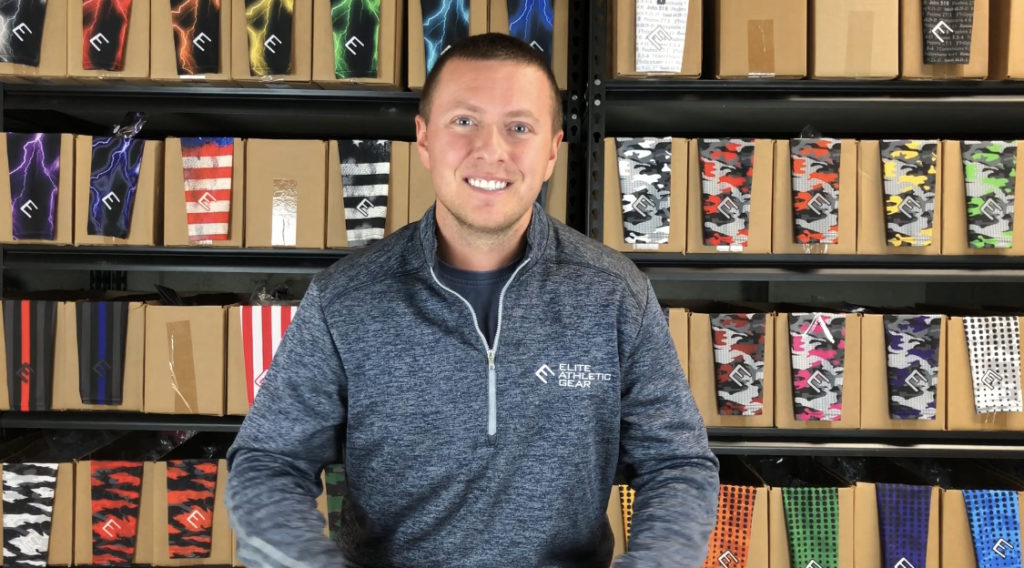 “I had absolutely zero idea what I was doing or how to start, so I took to the internet to try and teach myself everything I could,” says Brandan Adams, BS’14 (Flor), about deciding to start building his own business during the spring semester of his senior year at Fairleigh Dickinson University’s Florham Campus.

Adams studied business management and played baseball at FDU, and both experiences led him to create Elite Athletic Gear (EAG), a brand of sports gear designed by athletes, for athletes. Adams’ brand idea was born from the ordinary accessories used by his fellow baseball players.

“I started noticing that, on every team we played, people only wore solid color compression arm sleeves… and I saw a niche in the market to start making sleeves with more fun and flashy designs that would be able to show an athlete’s true color,” Adams explains. “I would ask my teammates what they thought and for suggestions, and the next thing I knew, I was making business names… and then Elite Athletic Gear was born.”

Adams’ one-man operation started with sacrifices. As he balanced school, baseball and social life, he built his dream while building his own skills. He performed hours of online research into making a brand. He vetted samples in his dorm room from manufacturers, searching for the one that gave him the best quality with a quick turnaround. He taught himself to use design software like Adobe Illustrator and Photoshop. He learned about pay-per-click (PPC) advertising from a teammate and gained experience managing a network of Twitter accounts, eventually gaining over three million followers, before using this knowledge to promote EAG on social media.

He did all of this while finishing his business management degree in FDU’s Silberman College of Business, which he said was “an asset in the sense of touching on a piece of accounting, finance, writing business plans, marketing… it allowed [him] to have enough understanding and practicality to utilize those courses to grow a healthy company.”

Upon graduating, he worked a full-time job, reinvesting his earnings into his new business and his student loans. To maintain progress with EAG, he woke up at 5 AM every morning to answer emails and pack orders before work. After work, he continued tinkering late into the night, often not getting to bed until after midnight.

Adams’ sacrifices paid off. He eliminated his student loans after seven months, allowing him to funnel more funds toward EAG. Two years after Adams graduated, his business gained attention from a few professional athletes and its growth skyrocketed.

In October of 2016, Adams quit his job and made EAG his full-time focus. “That was still one of the scariest, but best decisions I have ever made in my life,” Adams says.

With the growth of EAG as his primary goal, he was able to greatly increase sales and maintain steady growth.

EAG is still owned and operated exclusively by Adams — with some occasional help from his wife, family and friends when things get busy — and he values the rewards of a small business, like great customer service. “EAG offers a true small business feel,” says Adams. But the business isn’t as small as you’d expect it to be after reaching only its five-year anniversary. It’s now a multi-million-dollar business and growing each year, thanks to the hard work of Adams.

“I’m addicted to the grind,” Adams says. “I always say I’d rather work 100 hours a week for myself than 40 hours for someone else.”

Now, Adams hopes to begin hiring part-time employees and delegating some of his workload to expand product lines and increase productivity. He and his wife, fellow FDU alum and former FDU softball player, Brittni Adams, BA’14, MA’15 (Flor), are expecting a son in February, and he knows that the only way to continue to grow and find personal balance is with some help.

Looking back on his time developing EAG, he offered advice for current students interested in pursuing their entrepreneurial goals, “Stay hungry and don’t be complacent. So many people fall into a groove that becomes the norm… in my opinion, it was more satisfying being able to buy my first home at 22 years old than going out four nights a week.”