Home / Keeping up with Cat Krawiec

Keeping up with Cat Krawiec 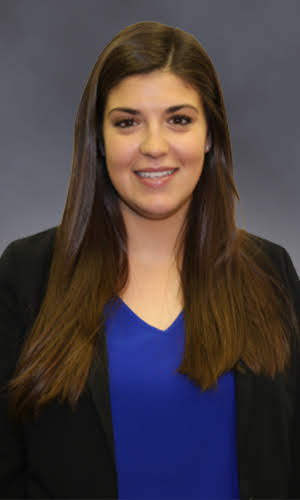 Cat Krawiec, BS’13, MSA’15 (Flor), knew that entering into a career in the world of collegiate athletics would be no easy task. Krawiec, assistant director of championships at the Sun Belt Conference, found that with determination and persistence she’s been able to fulfill her dream. Krawiec catches up with FDU What’s New and shares her road to success.

She worked at several odd jobs before landing her current position.

After completing her master’s degree at FDU, Krawiec worked every odd job in the book. “I was a high school field hockey coach for my alma mater [South Plainfield High School], a substitute teacher, a digital communications and marketing associate, and even worked on a construction site.”

She has worked with all three divisions of collegiate athletics.

Before landing her current position with the Sun Belt Conference, Krawiec worked with the Big East Conference and the National Collegiate Athletic Association (NCAA). These opportunities provided her with the chance to work with all division levels of collegiate athletics.

“I was able to land myself a championship assistant position at the Big East Conference in New York City,” where Krawiec worked from August 2016-May 2017. “After that [June 2017], I moved to Indianapolis, Ind. to work as a postgraduate intern at the NCAA in championships and alliances.” While there, I worked with Division III women’s volleyball; Division II men’s and women’s basketball; National Collegiate women’s gymnastics; and Divisions I, II and III men’s lacrosse.” She finished her internship in June 2018.

She spent time following the postgraduate internship at the NCAA applying and interviewing for jobs. “I was offered a job as assistant director of championships at the Sun Belt Conference, a Division I NCAA Conference. I have worked with our cross country; women’s soccer; men’s soccer; volleyball; football; indoor track and field; men’s and women’s basketball; women’s golf; men’s golf; outdoor track and field; and baseball championships. I also oversee our Student Athlete Advisory Committee.” 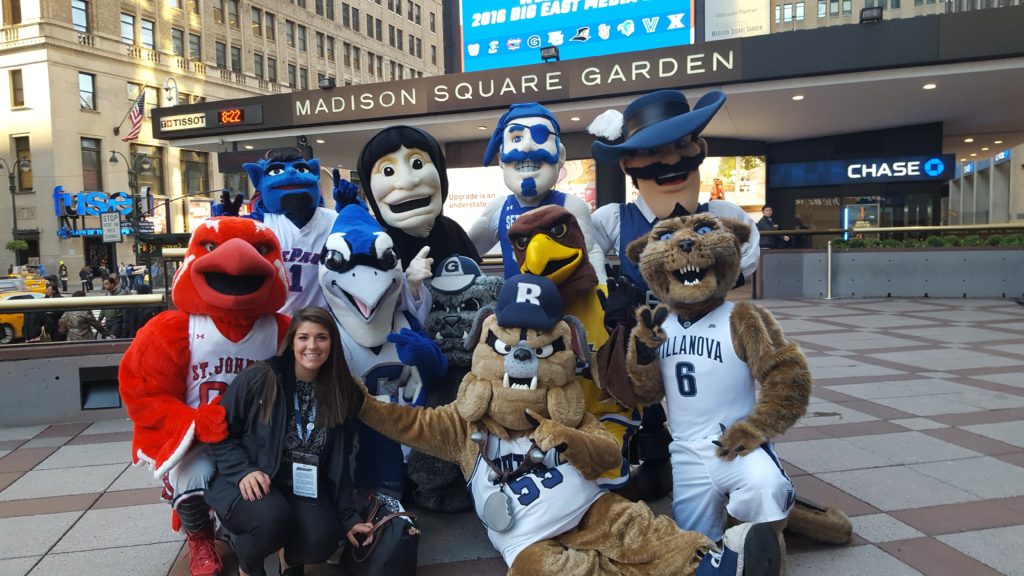 Alumna Cat Krawiec with mascots from the Big East Conference in front of Madison Square Garden.

She has had some amazing experiences since landing her position with the Sun Belt Conference.

“Since being at the Sun Belt, I have had a lot of different experiences outside of my normal day–to–day work.”

Krawiec also jumped at the chance to be a part of the 2020 College Football Playoff National Championship, hosted at the Mercedes Benz Superdome in New Orleans, La., in January. “I volunteered with the Collegiate Football Playoffs as a spirit squad host for the Fiesta Bowl Champion, Clemson University, Clemson, S.C. I traveled with the cheer, dance, spirit squads and mascots while they were in New Orleans. I was on the sideline with the team during the game.”

She attributes her early career success to her resiliency and FDU.

“I’ve had so many unique and different experiences with places, people and things over the last five years.”

While at FDU, Krawiec was very involved while both an undergraduate and graduate student. She was a field hockey student-athlete, president of the Student Athlete Advisory Committee (SAAC), a member of the Florham Programming Committee (FPC), studied abroad at Wroxton College and was a sister of Theta Phi Alpha Sorority. While in graduate school, she worked as the graduate assistant for the University’s Public Relations office and as an intern in the Devils Athletics Department.

“When I started my master’s degree, I went into the former Division III Devils Athletic Director, Bill Klika’s office and asked if I could volunteer and be an intern for the Devils Athletics department. Everyone who worked in that athletic department contributed to my success after leaving FDU.”

The thing that comes through the most though, is her resilience. “I have been told no, and been rejected more times than I can count. Every time, I had a pity party, but I never camped out and lived there. I picked myself up by my bootstraps and just kept swimming.”

She credits her family as being her biggest support group.

“My family has always been my biggest support group. My parents have supported me through every success, but more importantly through every failure.”