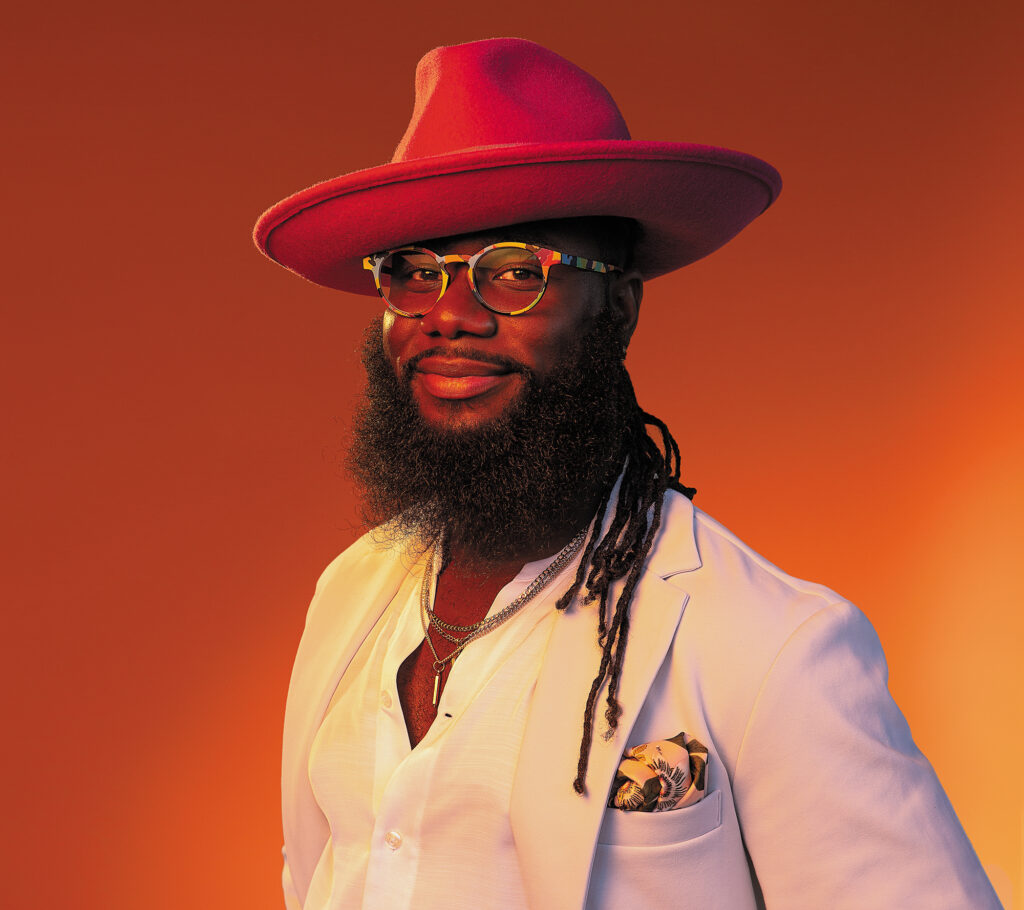 But it’s not an ideal world.

Caulk encourages the acceptance of LGBTQIA (lesbian, gay, bisexual, transgender, queer and/or questioning, intersex and asexual and/or ally) members of the Rutgers community; helps them find a comfortable space in the community; and promotes community understanding and acceptance of the queer population.

“Diversity, inclusion and equity work is everyone’s job,” he says.

Caulk is in his ninth year with Rutgers. “I was promoted to director of the Center on Juneteenth of 2020, as the first Black, queer man to serve in the role.” He also is an advocate elsewhere; in 2017, he discussed diversity, race, gender and sexuality with Florham Campus resident assistants and Greek life leaders. “It’s good to see the conversation happening at my home school.”

The needs of the LGBTQIA community vary, he says. “Nonbinary and transgender people have different experiences than do gays and lesbians. But everyone is looking for a sense of belonging.”

At Rutgers, “our queer population is very accepted,” says Caulk. For eight years, Campus Pride Index has named Rutgers as one of the top 25 LGBT-friendly schools in the country.

He suggests schools consider gender-inclusive housing and chosen-name systems for use of preferred names on campus. “University systems should also employ nurses and practitioners who can speak to trans people and the queer population.” Food insecurity is also often a factor in the LGBTQIA community, as many students do not receive support from their families.

But, “the biggest issue is students being able to afford to continue college,” says Caulk. “So, we have an emergency fund students can apply for and receive a nominal amount of money to apply to their tuition, transportation and rent.”

His focus on social justice extends beyond the LGBTQIA population. “We can talk from a lens of queerness or gender and sexuality, but we must keep in mind that when we say social justice, there are other lenses that we need to look through. Race is certainly at the top of the list, and every conversation can lend itself to race — health, wellness, structures and systems, resources or housing and food. We have to remember that people are intersectional.”

Caulk points out that Black queer and trans people have been left out of the conversation at a high cost. He notes the increased death rates among young Black trans women as compared to the general trans population. “These narratives are lost, hidden or erased,” he says.

In his work, Caulk makes sure no one is left out. First and foremost, he affirms. “I tell people, ‘you are enough, you are seen, you are worthy and you are loved.’ Then I tell them there is an immense amount of bravery to live in your authentic self. And I try to encourage them. I advise them to find a community that sees them and honors them, but to protect themselves — be mindful of the people with whom and the spaces in which they share things,” he says.

But most importantly, Caulk says, “Remember that when you are living your free and liberated life, you are also setting precedence for someone else to do the same. You are not alone.”