IT Student Embraces Barkada and Tinkers with His Future 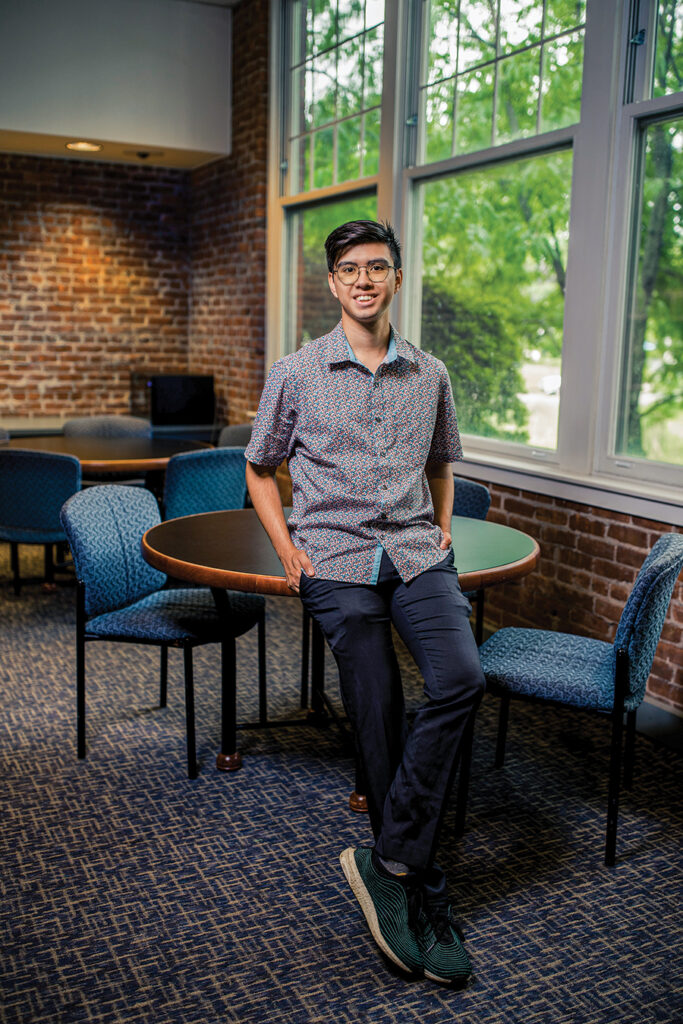 Christopher Laman is always meeting new people — whether through Barkada, the Filipino club on campus; his part-time job in computing services; or an internship in the information technology (IT) field — and he loves it.

“Barkada is the Tagalog (a language predominately spoken in the Philippines) word for a group of friends,” says Laman, a student in the 4+1 B.S. in information technology/M.S. in computer science program. “We bring people together, and we celebrate Filipino culture.” Some examples are line dancing and eating certain Filipino foods, such as halo-halo, a dessert made from beans, shaved ice, evaporated milk, ice cream and sweet yam. “My mom is from the Philippines. I eat Filipino food probably every other day!”

But really, the best part is the inclusivity. “We welcome all different cultures to come into Barkada,” he emphasizes. “It doesn’t matter what your heritage is, you are more than welcome to come and have fun with us.”

When he’s not busy with Barkada, Laman is tinkering.

“I’ve always loved tinkering with things,” he says. In high school, he started building computers for friends and upgrading them.

For the past four years, he’s been tinkering and working in computing services, another place he meets new people, “different students from throughout FDU — nursing students, biology students and business students,” Laman says.

And then there’s his internships, where he gets to tinker with different job environments and find the perfect places to network.

First, he worked as a quality-assurance intern at LabCorp. “I worked on a huge project that we presented to the chief information officer. We wanted to find software that could detect when a system is going to go down, so that engineers and IT teams could prevent it.” The team did extensive research, speaking to people throughout the company and with developers. They recommended increasing the use of features of the program Splunk, a data platform.

“LabCorp is a Fortune-500 company, but it has the environment of a young startup,” Laman says. “Everyone’s ideas are valid there.”

For his most recent internship, he worked at UPS.

While most people might think of UPS as just trucks and packages, Laman says the company is largely run on “virtual machines,” computers that are linked by a server to larger, more powerful machines that contain complex software.

“The job is very important,” he says. “If one machine goes down and you can’t get that back up, that’s thousands upon thousands of dollars gone by the second, because orders can’t be filled. There would be planes on tarmacs that can’t leave because of an error.” He finds that a bit intimidating, but very exciting.

Laman wants to work somewhere that values his knowledge base, but that also keeps him gaining wisdom, so he can continue to grow.

As a student athletics ambassador for the Knights, he assists “with marketing, with setting up events and anything else the assistant director of athletics needs help with.”

Laman enjoys meeting new faces around the pool table in the commuter lounge, located in the campus Fitness Center. “I will go and play pool with strangers. One day I met two freshmen IT majors. I tried to give them as much advice as possible.”

“In high school I was a bassist, playing jazz and upright bass in the orchestra,” he says. For fun Laman played rock ‘n’ roll songs on his electric bass guitar. He also was a percussionist in the marching band (playing the timpani drums) and in an indoor percussion group.

His favorite subject for his photography hobby is cars. “One of the meets I went to was at Bear Mountain,” he says. “It had Ferraris, Lamborghinis and the like.” He enjoyed being able to focus on the unique features of those designer autos, but says he is just as happy with photographing Mustangs and Camaros, too.