Shakespeare Scholar Investigates the Sources of the Bard’s Inspiration 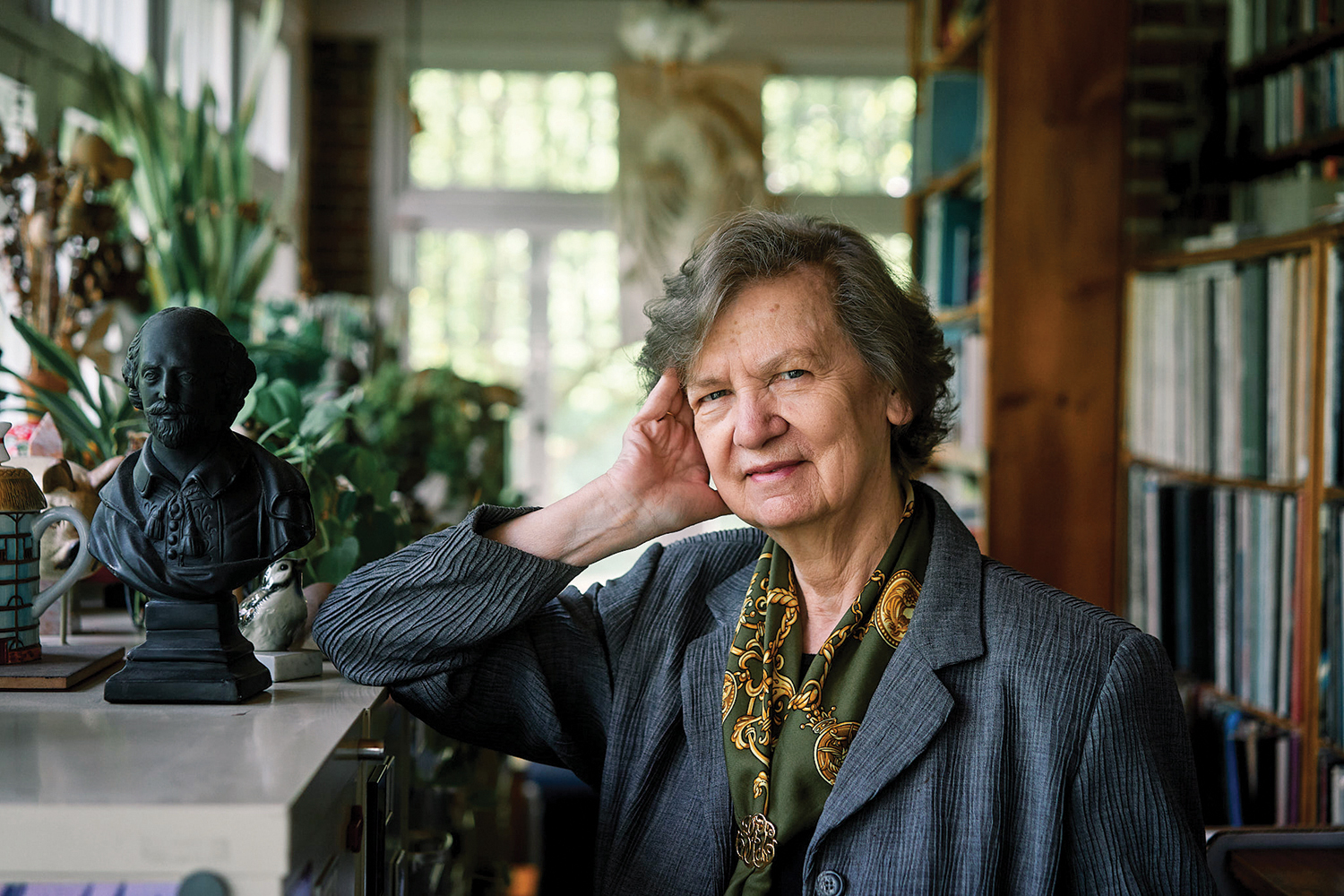 In 1998, on a Board of Trustees trip to Wroxton College, June Schlueter, BA’70 (Ruth), looked in awe at what was once the estate of the North family, unaware of how the history in front of her would later intersect with her scholarship.

Now, 24 years since that trip, Schlueter spends most of her days searching for books that were once housed in the North family library at Wroxton. Schlueter and her colleagues have located many of the original books that once belonged to Roger North, the second Baron North, born in the Elizabethan era. Most of the books were sold at auction in the 1920s and spread out throughout England and elsewhere. The 60 volumes they have discovered in libraries so far — nearly all signed by Roger North — have led to groundbreaking findings about the writings of William Shakespeare.

That’s because although Roger North collected the books, it was his brother Sir Thomas, the second son, who wrote marginalia in the texts. Those marginal writings, Schlueter argues, are the original and continuous sources of inspiration for most of Shakespeare’s plays.

“Right now, we’re working on a late play, Cymbeline. It’s just so clear from the marginalia that Thomas North wrote the play originally,” says Schlueter, who works in partnership with Dennis McCarthy, a self-taught, independent Shakespeare scholar, and, more recently, Michael Blanding, an investigative journalist. “We’re not Anti-Stratfordians, we’re not saying that Shakespeare didn’t write the plays … but we can show how every play in the Shakespeare canon, except for two (The Merry Wives of Windsor and The Two Noble Kinsmen), were written by Thomas North first, and then adapted by Shakespeare.”

Schlueter’s work on this subject has been widely published — it was even featured on the front page of The New York Times in 2018. She’s appeared on the Folger Shakespeare Library’s podcast “Shakespeare Unlimited.” Her latest book, Thomas North’s 1555 Travel Journal: From Italy to Shakespeare — coauthored with McCarthy and published by FDU Press — identifies Thomas North’s travel journal as Shakespeare’s starting point for The Winter’s Tale and Henry VIII.

A Love of Art and Literature

Becoming a Shakespeare scholar was never something Schlueter foresaw as she worked as a secretary in New York City law offices after high school. In fact, she “never [even] had an aspiration to get a degree,” she says. However, she did feel intellectually restless. Living in Garfield, N.J., at the time, FDU’s Rutherford Campus was right in her backyard — so, in 1962, she signed up for a Saturday writing course.

Schlueter continued taking Saturday courses at FDU while working, sometimes going to the Florham and Teaneck campuses for evening courses, just in hopes of learning something new. “It took eight years of doing that, and in 1970, I got a degree,” she says. During her eight years at FDU, Schlueter cultivated a love for literature and art. She continued taking courses for the intellectual stimulation, enough to earn a Master of Arts from Hunter College and a PhD in English and comparative literature from Columbia University.

Ultimately, she put the degrees to use in her 31-year career at Lafayette College, holding posts as Charles A. Dana Professor of English and provost and dean of the faculty, eventually retiring in 2008 with an emerita title.

Schlueter earned a Fulbright grant in 1978 to be a visiting professor at the University of Kassel in Germany. “Students flocked to my classes just to hear an American accent,” she says. “They didn’t sign up for classes because they enjoyed modern drama or Shakespeare. They just wanted to hear me talk!”

VENTURING IN A VOLKSWAGEN

While in Germany, Schlueter and her husband frequently drove their Volkswagen Beetle across the border into East Germany. “It was quite a scary experience. The guards would practically tear your car apart looking for someone being smuggled out of the country,” she says. “The difference between East Germany and West Germany was just incredible.”

RETURNING TO HER ROOTS

In 1997, Schlueter joined the FDU Board of Trustees. “I was interested because there’s so much potential here,” she says. “The liberal arts need advocates,” she says. “I think Fairleigh Dickinson is such an advocate.” She completed her board service in 2005.