Basketball on His Mind and a Stethoscope in His Hand 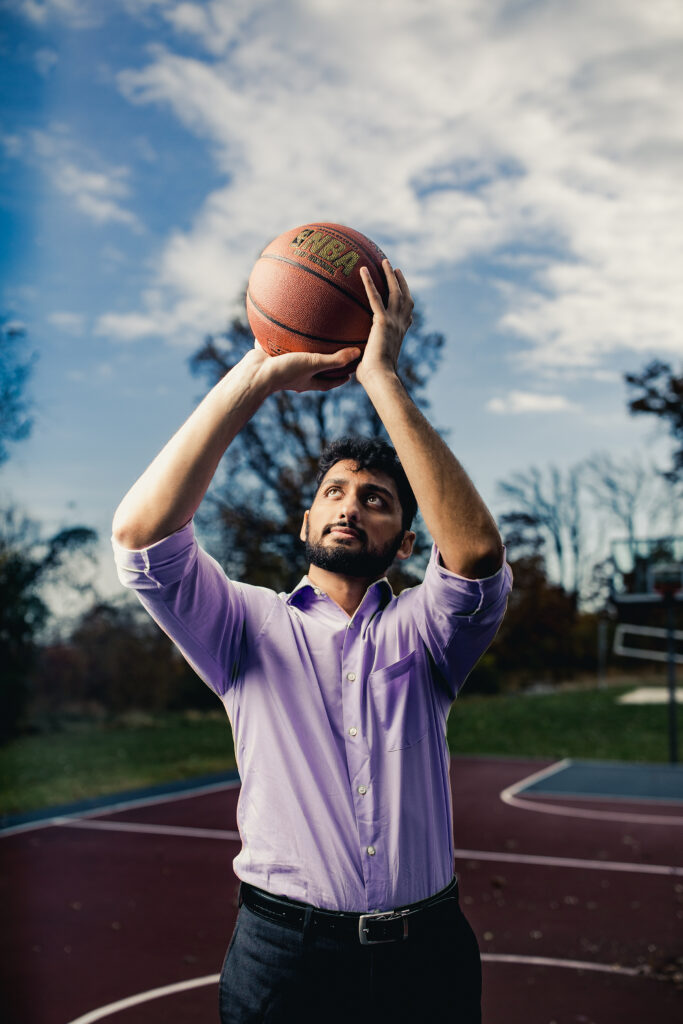 Nikhil Sharma’s life has long revolved around family, school, community and volunteerism. But the most impactful thing of all may be basketball.

“For me, it’s therapeutic, just going to a basketball court and shooting around for a little bit,” says Sharma.

“What I really appreciated growing up was the social aspect of sports, meeting new people, you’d become a sort of cohort or family suddenly. And then you remain in touch with those people. It was just a big part of my childhood.”

An avid fan (don’t judge him for his love of the Brooklyn Nets, he says), Sharma, a senior biology major, used to dream of playing professional sports. Realizing that injuries would prevent him from playing at the highest levels, he’s chosen to combine his passion for basketball with his interest in science to forge a career in sports medicine. Volunteering at a local physical therapy office and at Lehigh Valley Hospital-Cedar Crest, Allentown, Pa., confirmed to him his affinity for medicine.

“I liked that it didn’t even feel like work. I want to go into medicine because I know that after seeing a patient or treating them, it’ll provide me with the same feeling,” says Sharma.

In the summer of 2021, at his hospital internship, he assisted with a research project studying how COVID-19 affects elderly patients.

“I was limited to patient records for people 85 years and older. I would see what happened to them after having COVID-19 — ‘Were they discharged?’ ‘Where were they discharged to?’ ‘Did they ever return to the hospital?’ ‘Why did they return?’ — questions similar to that. I put it all into a database, and we tried to look for trends within that data.”

Now finishing out his time at FDU, Sharma will complete the first step of his four plus four program, heading next to Lake Erie College of Osteopathic Medicine’s campus in Bradenton, Fla. With a degree in sports medicine, he hopes to eventually work for a professional basketball or football team, or with a college-level team.

Arriving at FDU, Nikhil Sharma joined the first cohort of FDU’s Honors Academy, along with 12 fellow students on the Florham Campus. Together, they took five designated classes (one per semester) through the fall of their junior year. The Honors Academy also hosted a trip to Wroxton College in Oxfordshire, England, and offered various field trips over the years.

In his favorite Honors Academy course, taught seminar style by Richard Nisa, associate professor of geography, students dialoged on current events and topics. “I felt like I wanted to learn a lot more; I wanted to read the articles and to be part of the discussion. It’s just always been fantastic. That’s something I appreciate.”

“If you need help, seek it. Oftentimes, I catch myself hiding in my dorm instead of trying to figure out a way to deal with emotions or difficult times. I encourage people to seek the help they need to become the best version of themselves.”

Beyond the Brooklyn Nets, Sharma loves a few players on other teams. “I love watching Kyrie Irving. I think he‘s changed the sport; he‘s made it more of a finesse sport. And I like Steph Curry a lot, too.”

Sharma has been a member of the Florham Planning Committee, a resident assistant, a student ambassador and a member of Sigma Pi Fraternity.

Currently, Sharma is assisting James Salierno, professor of biology, with research on the quality of water surrounding a local wastewater treatment plant and a golf course. Sharma collects water samples every week from each location to analyze in the lab. The duo is looking to see if there is any difference in the nutrient levels between the water bodies.