Counseling Can Change Your Life. Dr. Davis Would Know. 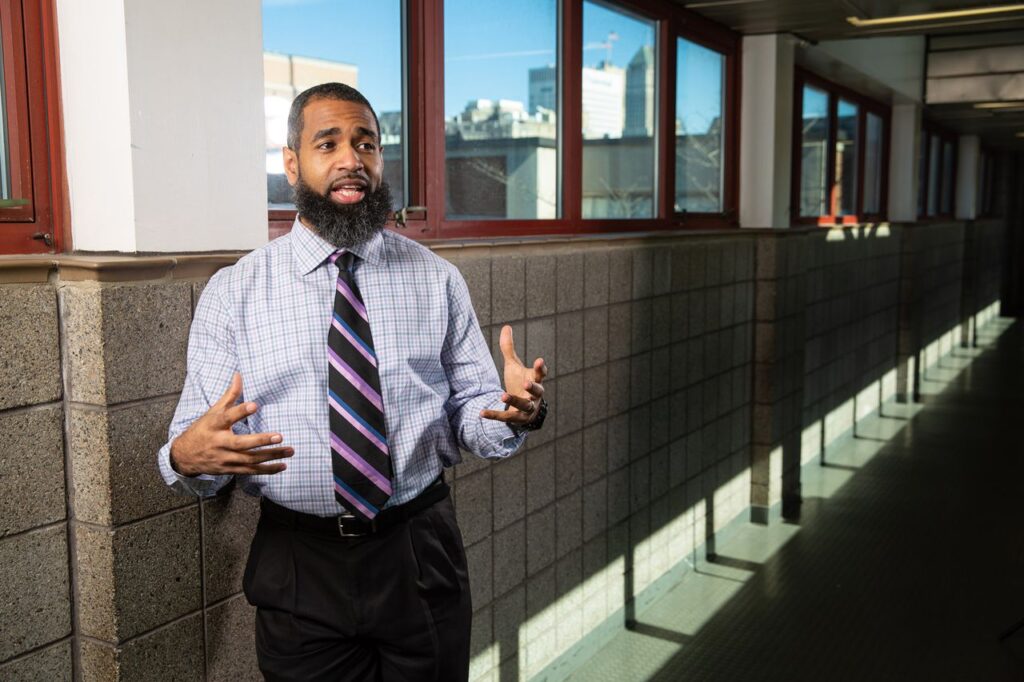 When Sinclair Davis arrived at Fairleigh Dickinson University for the first time, he enrolled as a business major. Back then, he was a teenager thinking more about his social life than about academics. And his grades showed it.

No one in his family had attended college. No one expected him to go, and no one had the knowledge base to support him when he encountered obstacles.

He dropped out of FDU. Just stopped going to class one day.

Several years later, Davis, AA’09, BA’11, MA’16, PsyD’18 (Metro), tried again, this time determined to work as hard as he could. This time, he picked psychology as his major.

“I was enamored with human behavior — how people interact, why some people get really angry and others are more relaxed and calm. I got really curious about the world and had so many questions to ask,” he says.

It took one false start, and “years of struggles, successes and failures,” he says.

Then one day, after all the papers, internships, fieldwork, externships, seminars and defending his dissertation, Judith Kaufman, now professor emerita of psychology, came out into the hallway and said those hard-earned words:

“There is nothing that I could say that could embody what Dr. Kaufman has meant to me and how I feel about her. Without her, and without Dr. [Ronald] Dumont [now professor emeritus of psychology], there’s no way I would’ve graduated. That’s not to minimize my ability. They were persistent. They were in my corner, making suggestions, being kind, and because of Dr. Kaufman’s influence, I got interested in school psychology. She’s the reason,” says Davis.

“My daily schedule is a placeholder. A suggestion,” laughs Davis. Part of what drew him to school psychology was the allure of each workday holding something different — a new challenge, a new project, a new counselee.

“We’re very hands-on, and we’re very involved in behavior modification,” Davis says. “The foundation of what we do is to get students to recognize an emotion and respond to it appropriately.”

"You can’t give up on kids. They need support, or sometimes to be reeled back in. If nobody had been there to assist me, I wouldn’t have graduated [from FDU]. I know how important it is to care."
— Sinclair Davis

“I’m working with kids who are growing up where I grew up [in Newark], who hang out where I’ve hung out, and experienced things that I’ve experienced,” he says. “But just because I’m Black and a student is Black, that doesn’t mean we’re going to be buddies. But in more cases than not, from what I’ve experienced, it does help build rapport. Having someone who looks like you and who may have been through the things that you’ve been through, well maybe you’ll listen to them a little differently.”

He cautions against taking too much credit for patient progress or stagnation. “Don’t get self-absorbed and think, ‘I did that. I’m the reason it happened.’ At the same time, if things aren’t getting better, you can’t say, ‘I’m horrible. I’m not a good clinician,’” says Davis. “What you do is acknowledge the work that a student is putting in. Granted, we’re facilitating it, but it’s strictly on them. If they’re excelling, that means they’re doing something that they didn’t do before. If they’re not, ask, ‘What can I do better? What can I do differently?’”

For a long time, Davis thought he had to be perfect to achieve his goals, and it’s a myth he’s pleased to debunk for his students.

“I thought that’s who you had to be if you wanted to be successful — top of the class. I didn’t understand a fixed mindset versus a growth mindset then. They know that I struggled in school mightily. I went to college and fell on my face. I procured debt.

I’m not this perfect Point A to Point B; there was a whole line in between. But I figured it out.”

“Mental health should be treated like any physical ailment. It’s rare that a person would not seek medical attention for a fractured bone, so why ignore an ailing heart or emotional well-being?”

In a guest column for NJ.com, Davis discussed best practices for school psychologists and counselors supporting students who are navigating the trauma of racial violence. He suggests: “get comfortable with uncomfortable conversations; recognize that racial trauma is inherited; create a safe space for listening; separate emotions from facts; expect to make mistakes.”

Davis spends most of his downtime having fun with his wife and two sons, ages 4 and 10. At the top of his bucket list is a visit to Hawaii.