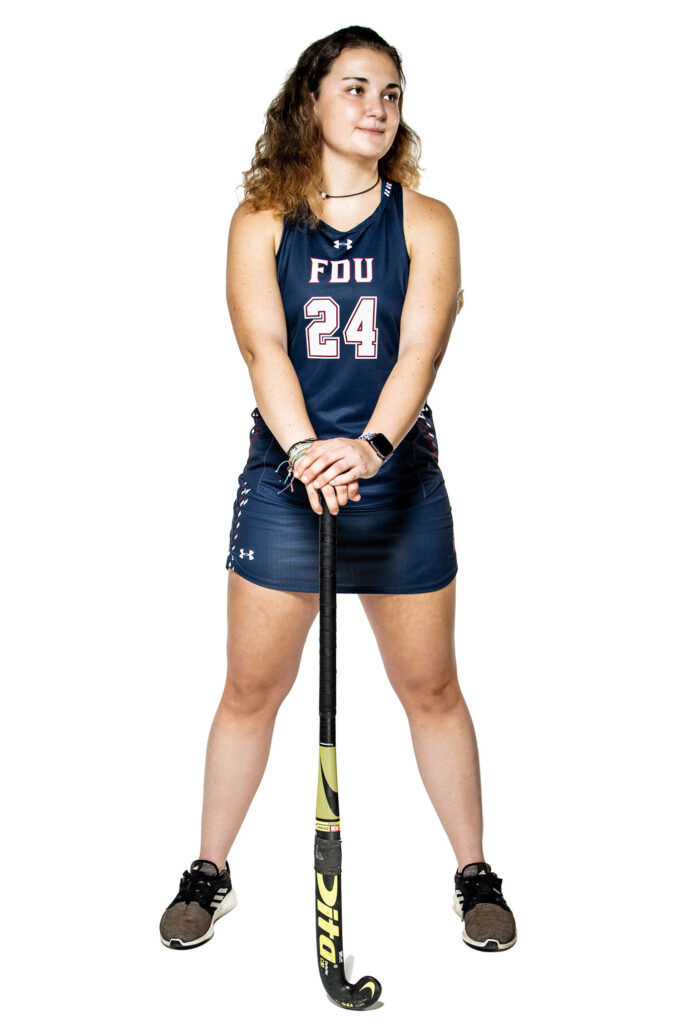 During the Summer Olympic Games, the world watched as Simone Biles, a four-time Olympic gold medalist and leading gymnast for the United States, took a step back from competition to address an unseen opponent: mental health. Around the same time, tennis superstar and four-time Grand Slam champion Naomi Osaka spoke out about her anxiety on and off the court. Both women spoke publicly in an effort to prioritize their own mental health and to take care of themselves — and to use their platforms to call greater attention to the importance of emotional well-being.

Senior forward field hockey player Kendall Moore can relate. “It is an important topic, no matter if you are a professional or student-athlete,” says Moore. “An athlete’s mindset and mental health are just as important as physical health.”

During the COVID-19 pandemic, Moore realized that she, along with many of her fellow student-athletes, were struggling. “I thought it would be nice to have a group or club on campus to meet and talk,” she says.

With the help of Field Hockey Head Coach Maura Johnston, Moore put together Sporting Strong Minds in fall 2020 — now an official chapter of The Hidden Opponent, a nonprofit dedicated to giving athletes support and resources, and to addressing the stigma of mental health in sports.

“Mental health is an important topic, no matter if you are a professional or a student-athlete. An athlete’s mindset and mental health are just as important as physical health.”

The first meeting over Zoom, with just the field hockey team in attendance, focused on how the student-athletes felt being at home, with their season canceled. Eventually, six more teams joined the Zoom calls and the group invited a guest speaker from the Virago Project, a nonprofit focused on improving the physical and mental health of female athletes.

“Being a student-athlete is a big part of your identity. I thought, maybe if we just talk about everything happening, it will help,” Moore says.

The student-athletes also developed a statement to keep them grounded and discussed goal setting.

One topic that came up during the virtual meetings was the importance of having hobbies and trying new activities. Players were invited to explore a new hobby. Moore likes reading, running and art, specifically painting. The communication and graphic design double major chose watercolors to paint sunflowers; her dogs, Snoopy and Jock; and other animals. She even sold some of her work!

“I think that’s one thing I got out of the pandemic. Of course, I love field hockey — it’s a huge part of who I am — but there are other things I love to do, and it’s OK to be well-rounded.”

Her advice for student-athletes who are struggling is to take it one day at a time.

“It’s just a sport at the end of the day. You’re a person first, and if you need that mental break or need help, don’t be afraid to reach out to someone. No one is going to be mad at you for having a bad day or for needing to talk about something.”