From Mascot on the Sidelines to Player on the Main Roster 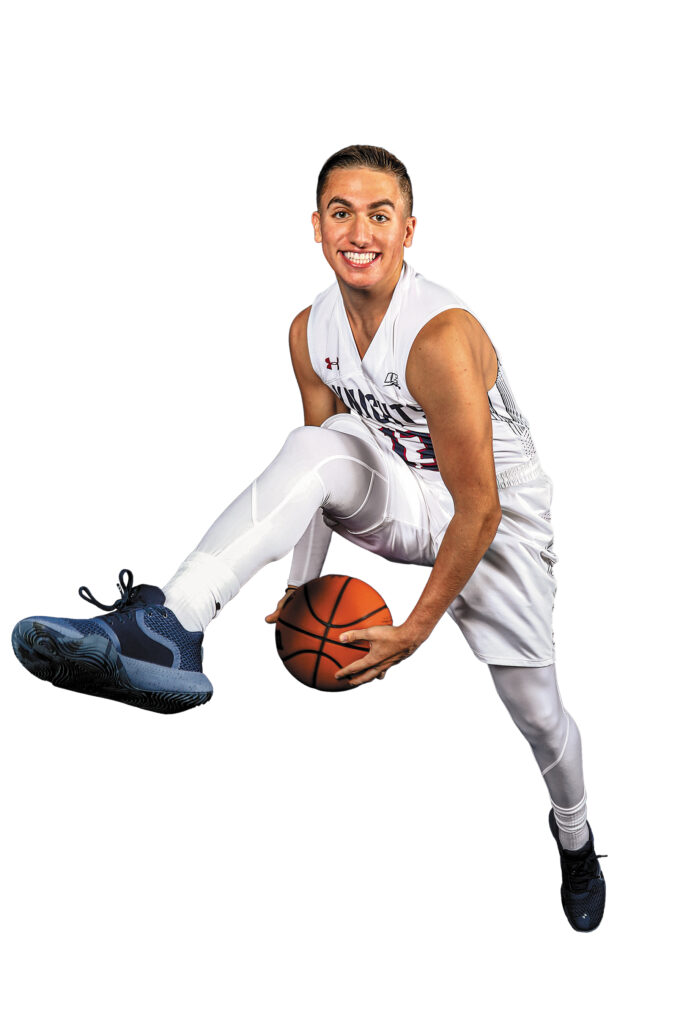 When Sal Xheraj, a senior accounting major, lost his mascot head during the 2019 NCAA tournament game, the FDU Knights against Gonzaga in Salt Lake City, Utah, he took it in stride. He was, after all, on court during March Madness.

Being on the tournament court as Knightro—the beloved mascot of the FDU Knights — was a bucket-list moment, even if it did not go as planned. “I initially took the position of Knightro because it was a way to show off my dance moves and fulfill my desire of entertaining people,” says Xheraj. “I would never have guessed at the plethora of opportunities that came in the future. I’m proud to say that I once represented Fairleigh Dickinson University as Knightro.”

Xheraj, who traded in his blue fur and tail for polo shirts to be the team manager for the 2019–20 season, now proudly sports a Knights jersey. Number 15 is officially on the team.

Head Coach Greg Herenda saw potential after watching Xheraj practice with the team during warm-up drills. Xheraj completed a walk-on tryout for the 2020–21 season, joining the team as a guard and scoring his first points as a Knight against Mount St. Mary’s in February, another bucket-list moment to check off of his list.

“Sal has been an incredible ambassador for our University. He has great energy and spirit, and now he’s helping the Knights in uniform,” says Herenda.

As Xheraj prepares for next season, he has serious goals to achieve. “I’ve been working out with my teammates and on my own to ensure that I am in the best shape possible to be a valuable asset to my team,” he says. “Ultimately, I hope to experience March Madness as a player this year.”

“He’s what FDU is all about,” Herenda told NJ.com. “It’s about opportunity. When you take a step back, you realize how much he has done and how much more he will accomplish.”

Xheraj isn’t known around campus just for his moves on the court. He has been an orientation leader and a member of the Student Government Association, has spoken on student panels for Silberman College of Business and has volunteered with the basketball team at a food pantry in Newark, N.J.

“I am so incredibly thankful that I committed to FDU in 2018,” he says. “If I’m capable of handling six classes a semester, basketball and volunteering, then I’m confident that I can handle a full-time job. Being a Knight has taught me hard work, time management and the importance of being part of a team.”

He chose FDU based on its proximity to New York City and the opportunities for internships. “When I first arrived at the University, I thought, “How can I cement myself in becoming the best student I can be?”

In the summer of 2021, Xheraj completed an internship with EY (Ernst & Young), one of the big-four accounting firms, a place where he developed a deeper interest in international taxation.

“He’s what FDU is all about,” Herenda told NJ.com. “It’s about opportunity. When you take a step back, you realize how much he has done and how much more he will accomplish.”