From Shy Introvert to Inspiring Leader 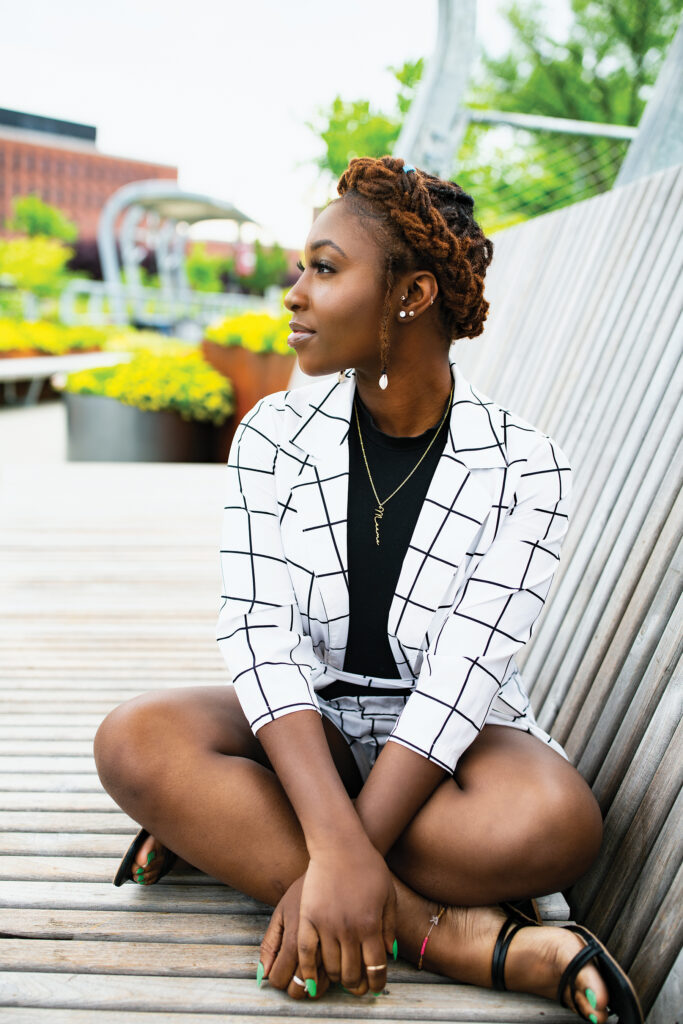 Although Mensah tends to prefer to avoid the spotlight, she became active in student life at the Metropolitan Campus, rising to prominent positions during her college days.

As Student Government Association (SGA) president, Mensah, BA’21 (Metro), became the voice of the student body. She established the Black Student Union (BSU) in 2020, serving as the group’s inaugural president. She proudly represented FDU as an orientation leader and as a Division I cheerleader for Knights basketball.

Speaking up and out didn’t come naturally to her. “Within my African community, women are told to be quiet, just sit in the background,” she says. “So I started speaking up within my family.” Mensah maintains strong ties to Ghana, where her parents are from, visiting there often prior to the pandemic.

After finding ways to express herself comfortably, Mensah made it her mission to support her peers in doing the same and encouraged them to “excel in their uniqueness.”

“I’m shy, but that doesn’t mean that I can’t lead in a way that is comfortable to me,” says Mensah, who often used her SGA platform to address student concerns with the FDU administration.

During her junior year, she led the charge to create the Black Student Union.“There wasn’t really an organization speaking to the entire Black community,” she says.

BSU strives to increase awareness and appreciation for African American issues, history and culture among the student body; meet the needs and concerns of all students of African, Caribbean and African American descent; and stimulate intellectual, political and social growth.

The union held its first event in February 2020, just before the COVID-19 pandemic hit.

Then, on June 5, 2020, Mensah brought the SGA and BSU together for a University-wide “Take a Knee” event in response to the murder of George Floyd. Members of the FDU community knelt in solidarity for nine minutes.

“It was important for us to stand united as a University and show that we oppose racial injustice. The Black Student Union needed to be that leading voice,” Mensah says.

“FDU is really a huge family. It’s important to be involved; it helps you to really figure out who you are. When you’re surrounded by like-minded individuals, they challenge you and hold you accountable,” she says.

That calling to serve the wider community also drives her post-college plans. Initially, Mensah chose to pursue a concentration in forensic psychology — she’s an avid fan of CBS’ “Criminal Minds.”

But after field experience with children at a YMCA and as a Sunday-school teacher, she realized her passion is working with children and families. She changed her psychology concentration to mental health and added a minor in social work to her degree.

Holding her faith close, Mensah plans to open her own Christian-based marriage-and-family counseling practice one day. For now, she’s pursuing her master’s degree at Iona Graduate School and intends to do a doctorate — all to continue to help others. “There are so many broken families, and there aren’t enough people helping mend brokenness, so I really want to,” she says.

Mensah hopes to visit every state in the United States and at least 10 countries by the time she turns 30. So far, she’s visited 18 states and five countries!

As a Knights cheerleader, Mensah traveled to the 2019 NCAA March Madness tournament alongside the men’s basketball team. “There was so much love and encouragement coming from the community. That was just a really great experience to be a part of,” she says.

Mensah pens a blog called “Loc’ed in Journey” — the name inspired by her decision to twist and lock her hair during the pandemic. She writes and posts encouraging messages rooted in her Christianity. Read it here: https://mmensah2.wixsite.com/locdinjourney.