Forever at the Intersection of Art and Music 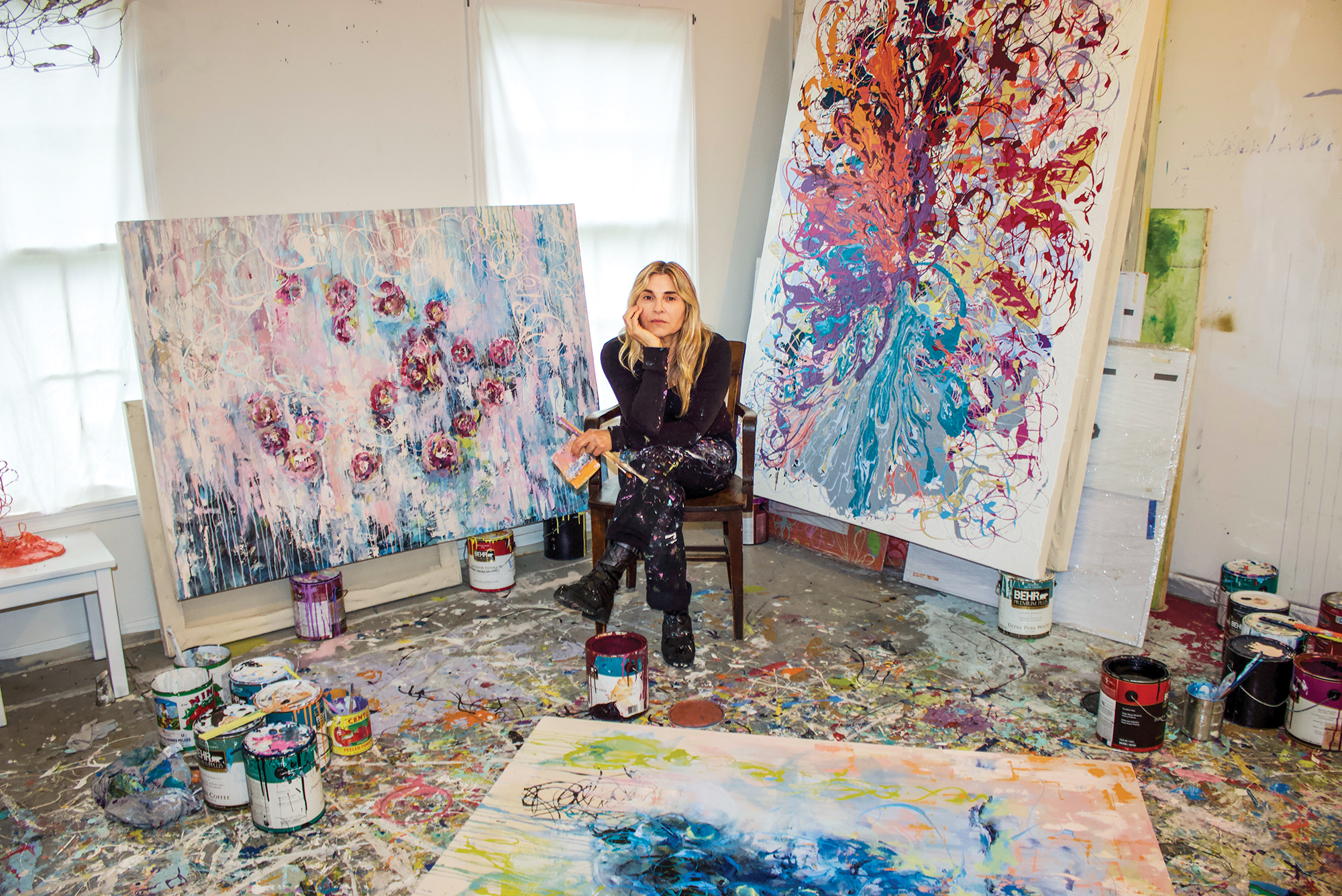 “My art has always been based on music, a physical expression of it, with an emphasis on contemporary jazz,” says Serena Bocchino, BA’82 (Metro).

Early in her career, Bocchino completed a prestigious residency at the Museum of Modern Arts’ PS 1 in Long Island City, N.Y. There she explored the saxophone in painting and sculpture. After spending more than 10 years abstracting the saxophone and other musical instruments, her work began to morph, depicting the rhythms, beats, flow and movements of the instruments instead. “My work became more about the sound of the music filling the space, the composition.”

Her introduction to both art and music came early.

As a child, she and her five siblings did art projects with their mother, artist Lucia Bocchino. Classical music and opera played in the background. “My mother encouraged me to enter art competitions and take formal art lessons. In addition to visual art, I studied classical guitar and the alto saxophone. My mother taught me the connection between realism and abstraction and between music and art.”

In her professional career, Bocchino most often works with enamel and oil paints. Often, she incorporates charcoal and graphite. “My work is created in layers: each mark, line, brushstroke and pour defines the next, and maintains the basic qualities of abstraction. The sequential nature of the multifarious hues and tones creates the structure of each composition in both 2D and 3D. Each element of a work almost acts as an instrument in a composition, contrasting or complementing the next mark, pour or construction. This layered progression of drawing, pouring and embellishing has been essential.” 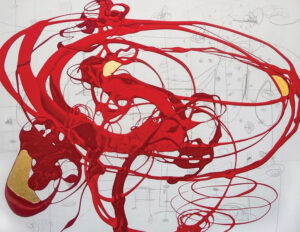 In her series “Fever,” based on the classic song of the same name, layers of brilliant reds mingle with splashes of black, gold leaf and other colors on backgrounds of white, while charcoal musical clefs and notes are mixed into the compositions. A short documentary on the “Fever” series shows Bocchino’s process, from the initial charcoal drawings to the pouring of paints and the hand application of gold leaf.

Bocchino also makes 3D work using wire, clay and acrylic sheets. “Creating sculpture is an extension of my 2D work. It allows me to further investigate ideas in other mediums. Sculpture allows for a fresh perspective of my paintings and drawings.”

She studied fine art at FDU as an undergraduate student and at New York University as a graduate student. She took painting with Arie Galles; printmaking with Marvin Goldstein, professor emeritus of art; sculpture with Bradford Graves and color theory with Wojciech (Voy) Fangor at FDU. During a semester abroad at Wroxton College in Oxfordshire, England, Bocchino created a suite of architectural drawings of Wroxton Abbey using graphite pencils and paper.

Surviving and thriving as an artist in New York after graduate school took “commitment, perseverance and passion,” Bocchino says. She worked three jobs while maintaining a studio in the East Village. It was an exciting time, meeting other artists and attending gallery openings. In those days, she and her husband, then-fiancé, Stephen Keough, BS’86 (Metro), could be seen carrying her huge paintings from studio to gallery, hoping the wind did not catch the canvases as if they were sails.

Now, Bocchino has a studio in her Somerset County, N.J., home, and despite the pandemic, has been busy exhibiting new work.

Two of her pieces showed at the Oculus Transportation Hub at the World Trade Center during the pandemic.

“I even had one of my works projected on the side of a building at Czong Institute for Contemporary Art (CICA) in South Korea.”

But it was back in 2019 that Bocchino embarked on her biggest site-specific installation yet — the inaugural exhibition of the TRANSITional Arts Program at Newark Penn Station.

Sponsored by the New Jersey State Council of the Arts and initiated by NJ Transit, her artwork covered both the front and rear facades of the building. Two additional works were also on display under glass at the entrance to the PATH train. And, along the Market Street Tunnel underneath the station, in 27 panels measuring 3 × 5 feet each, were pages of her children’s book, “What Am I? The Story of an Abstract Painting.”

Her next book, “Heroes: Women Artists Who Influence and Inspire,” is an anthology exploring 37 female artists who have inspired and influenced Bocchino. The collection of poem paintings debuted at “Influence: Serena Bocchino,” an exhibition held over the summer at the Nicolaysen Art Museum in Casper, Wyo. The exhibit also included five series of Bocchino’s work from 2011–2021, featuring hanging veils, paintings and sculptures. She spent two weeks in residency at the museum, creating a site-specific wire-sculpture.

A suspended sculpture, “Understanding,” displayed at the Taoxichuan Art Museum of China’s Central Academy of Fine Arts in 2017. It measured 20 x 9 x 3.5 feet!

To honor their late mother, Bocchino and her siblings founded the Lucia Bocchino Fund for Promising Young Artists. Each year, children in grades pre-K to 12, submit art to an exhibition. The contest went virtual in 2020 and 2021, with art submissions coming from more than 30 countries.