What’s in Your Office?

The Spots Where Faculty Grade, Write and Research 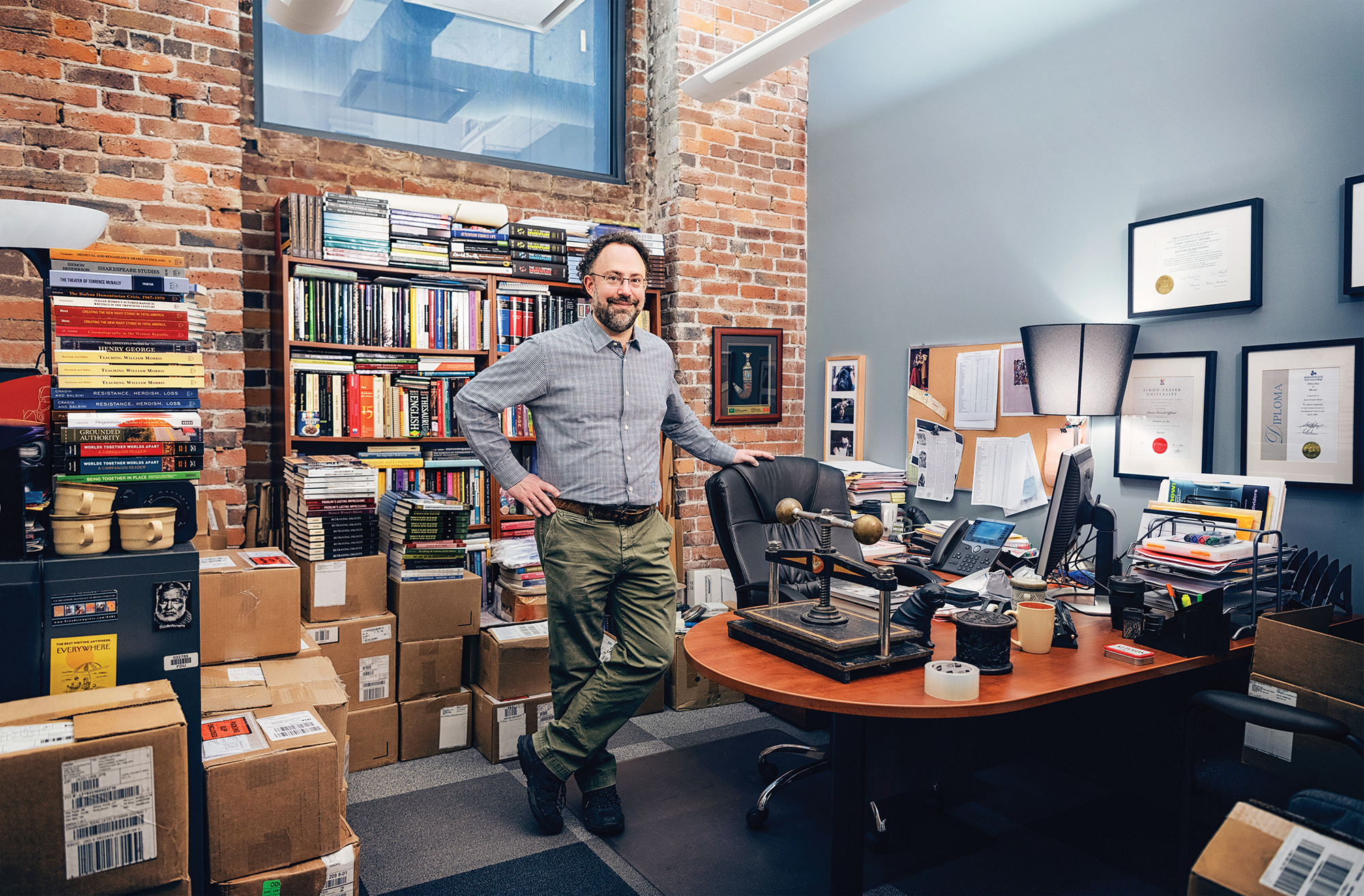 James Gifford ended up with his office because it was the only one available when he joined the Vancouver faculty in 2008. In the years since, he’s packed the space — mostly with books on shelves crammed two rows deep. “I think of my office as a workshop rather than a show house. The busyness of the space reflects my process of doing, making and thinking,” he says.

Inside the cartons by his desk, Gifford has even more books, titles published by the FDU Press. “We publish around 20 books a year. If I’m not making music or teaching, I’m either reading or writing.” Founded 54 years ago, the Press moved up to FDU’s Vancouver Campus for its 50th anniversary. 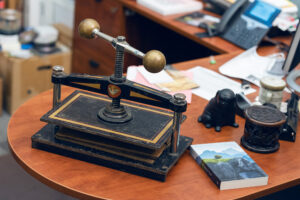 “I inherited the press from James Brigham, a scholar and a friend. He bought it in London. It’s a help when I teach my students to bind their chapbook projects at the end of the typography course I teach!” He also teaches courses in humanities, literature and communications and in the University Core.

Gifford’s office backs up to an alley that often plays host to Hollywood productions, with television shows including “Arrow” and “Lucifer,” and previously “Battlestar Galactica” and “Fringe,” filming scenes there.

He saved the tickets. Gifford, an opera singer himself, once took students to a dress rehearsal of “Carmen,” a Vancouver Opera production at the Queen Elizabeth Theatre, just a block away. In graduate school, Gifford studied music and literature. He’s starred in operas written by composers Wolfgang Amadeus Mozart and Giacomo Puccini. 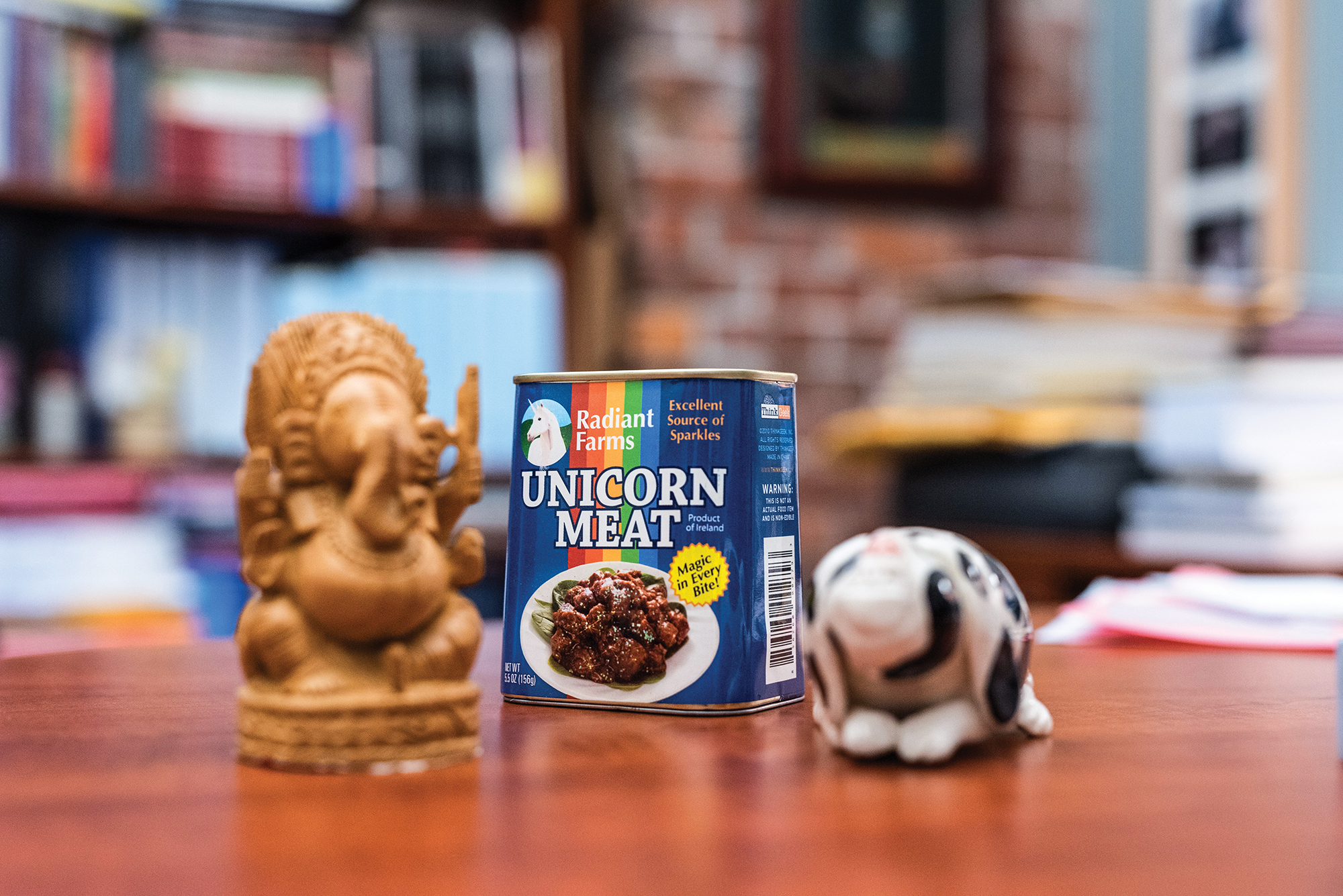 James Gifford has eclectic taste in trinkets and office decor, including both a joke gift of unicorn meat, at center, and serious gift, an ancient vessel flute called an ocarina, at right. (Photo: Martin Dee)

“There’s magic in every bite, but it tastes like a nightmare! My wife gave it to me as birthday present. Everyone in my home is a vegetarian except for me, so I think it was meant to be a taste of guilt.”

Another gift, the ocarina is an ancient flute and Gifford can play it (badly, by his own admission).

“I was a recorder major in music at The University of British Columbia, focusing on authentic Renaissance and Baroque performance practices. I only switched to opera later. The ocarina is a bit unfamiliar to me, but totally playable.” 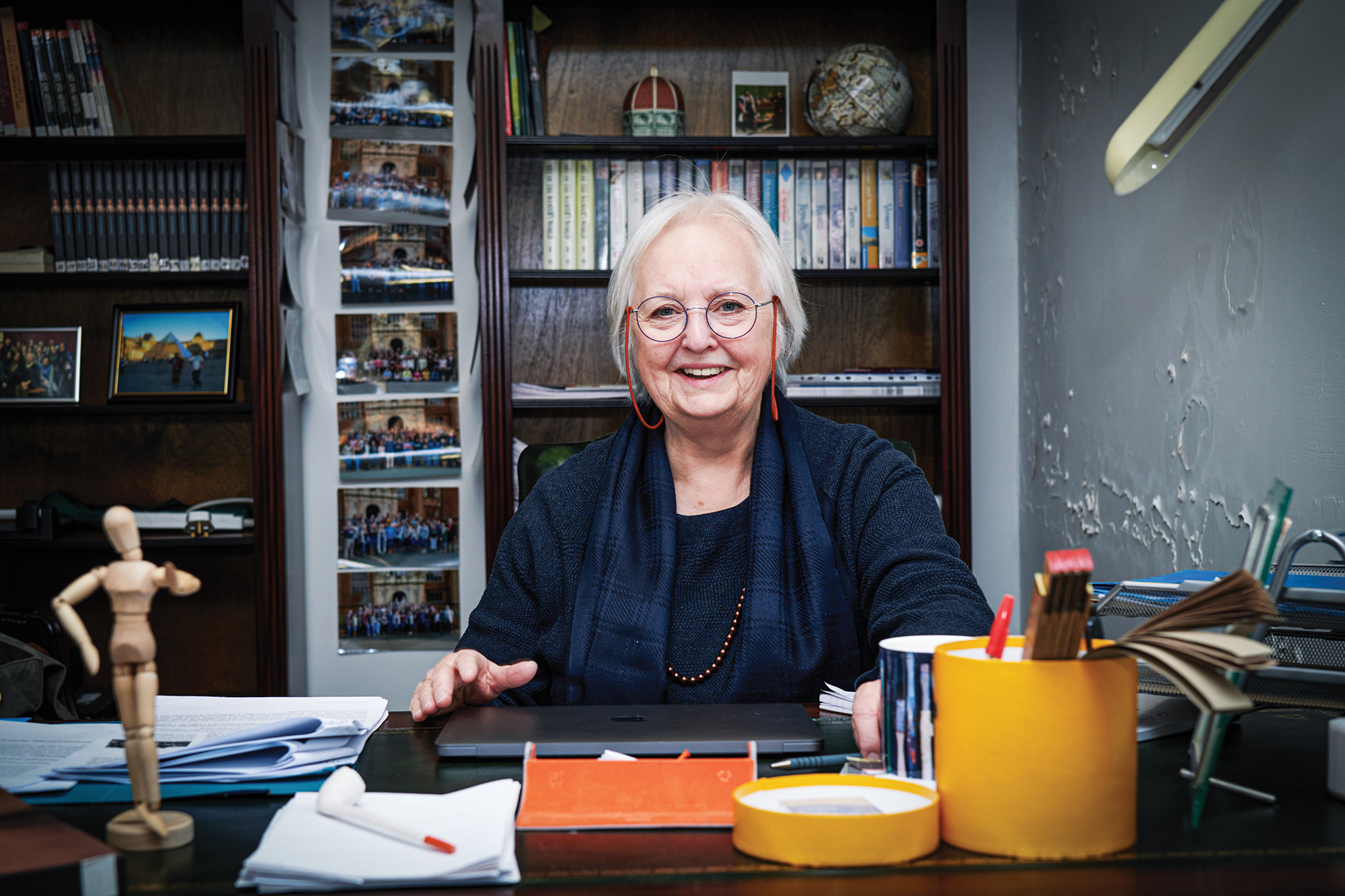 Tutor and Lecturer in the History of Art (Wroxton)

Wendy Hart affectionately refers to her basement office in Wroxton Abbey as the “Hobbit Hole” or “The Burrow.” Tucked away in a cozy spot, Hart says she spends most of her time “living in the past, talking about dead people,” and of course, discussing art history. Since 2001, she’s taught The Development of British Painting, tracing the evolution of British art and its influences. More recently, she taught an online course called Women Artists. Her office decor clearly identifies the space as the “art room” — with prints by William Hogarth, art postcards and posters, and one of her own originals, “Level 5,” showing dawn breaking over Oxford.

A smattering of old Wroxton class photos adorn the wall and shelves behind Hart’s desk. Traditionally, each semester the Wroxton class poses for a group picture on the Abbey steps. 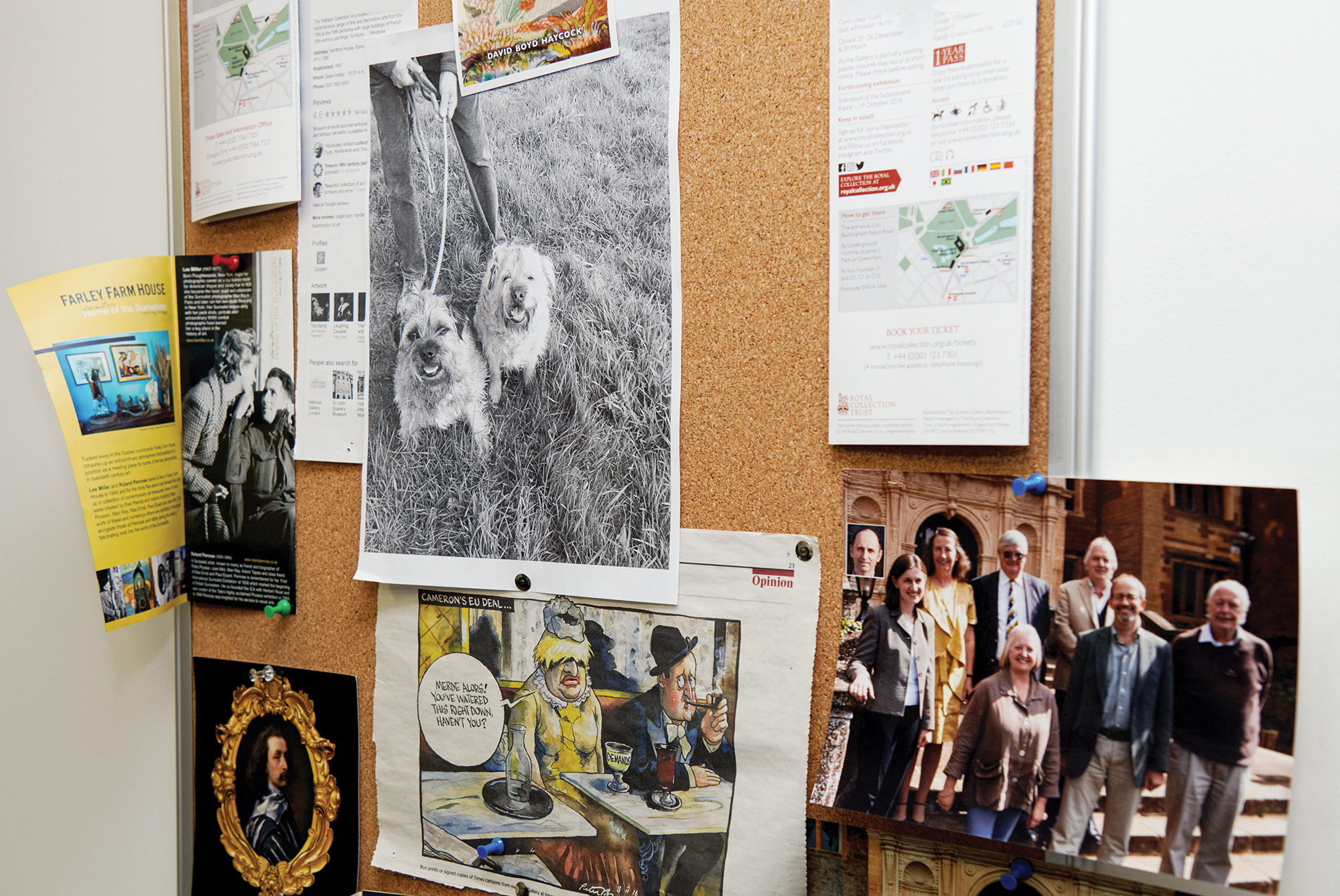 Presenting Monty and Charlie! Sadly, Charlie (right) passed away recently. Hart also has another border terrier named Archie. At the end of each semester, Hart invites her “arties” [art students] to her house for a celebration where they have snacks and drinks, meet her dogs, and just maybe, catch a glimpse of Freddie, her ginger cat.

“The faculty photo on the board is an old one. I’m somewhat sentimental — this photo shows late faculty members Joe Hone and Nigel Forman, both of whom sadly died a few years ago.” 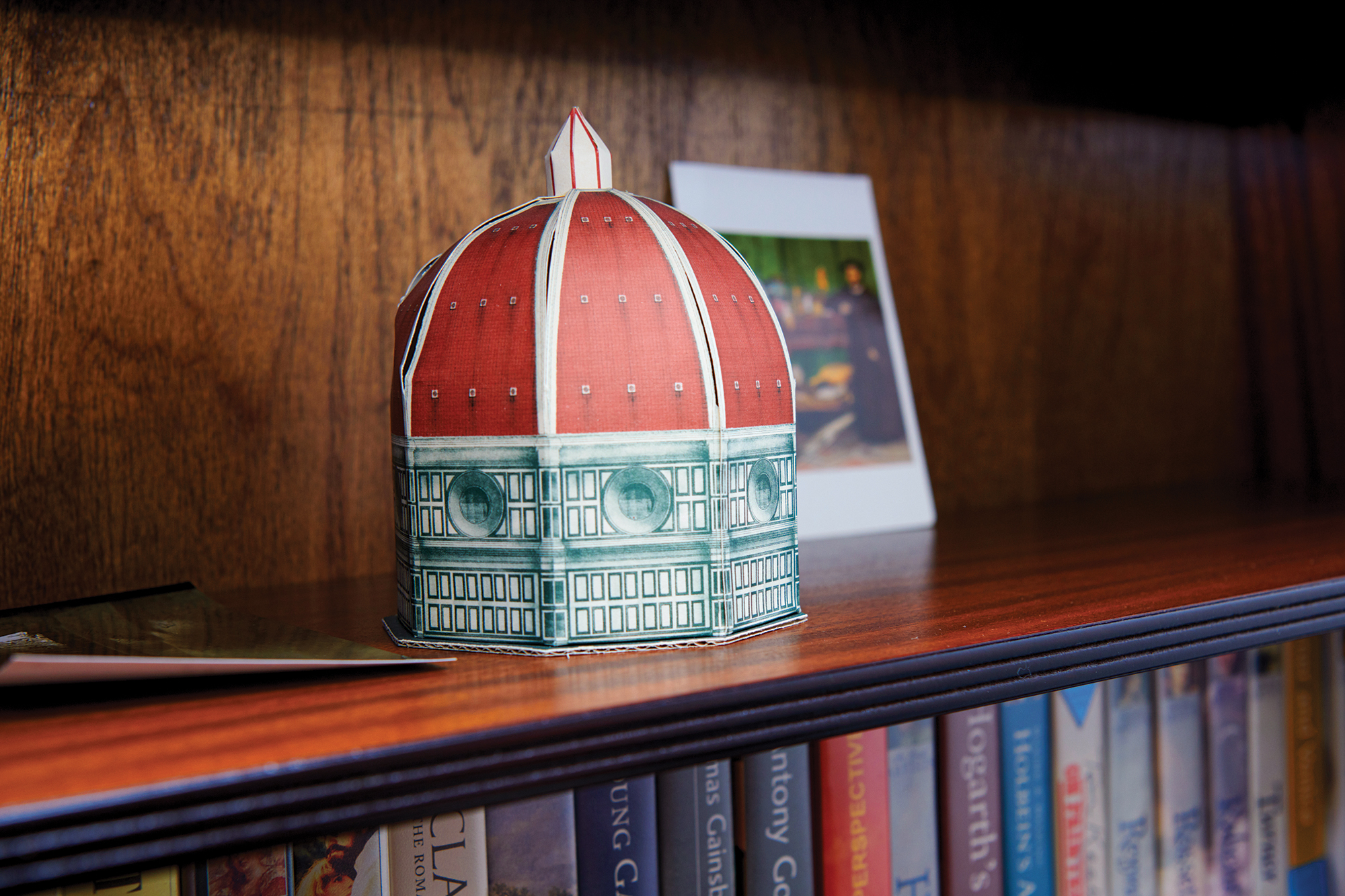 “The domed building is a cardboard mock of the Duomo in Florence, Italy, designed by Filippo Brunelleschi [considered a founder of Italian Renaissance architecture] — an amazing piece of architecture.”

“The wooden figurine is a small version of a ‘lay’ figure, a model to show students. Portrait artists would quickly sketch the face of the sitter, and later in their studio, set up a dressed ‘lay’ figure or dummy to work on the body of the portrait. As a joke, I have mine in the pose of the Apollo Belvedere. This is a pose taken from antiquity — the Apollo Belvedere represented a radiant and noble youth!” 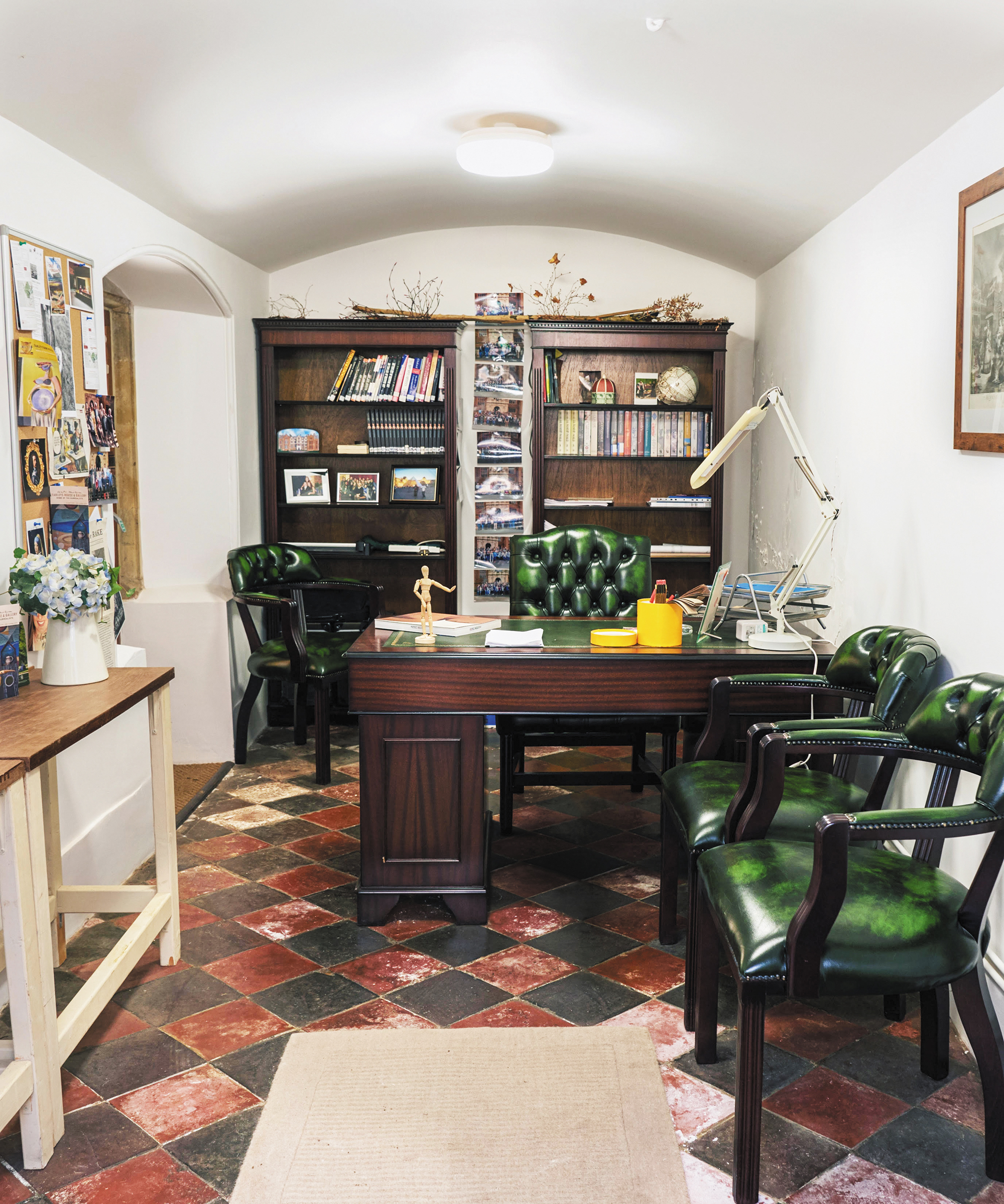 “The cellar is the older part of the Abbey — there are fragments of arches left from the original Abbey, demolished by order of Henry VIII. The floor of my office has the old tiles on it and the ceiling is vaulted. The window looks out onto a small, private courtyard garden and it transports you back to another age.”