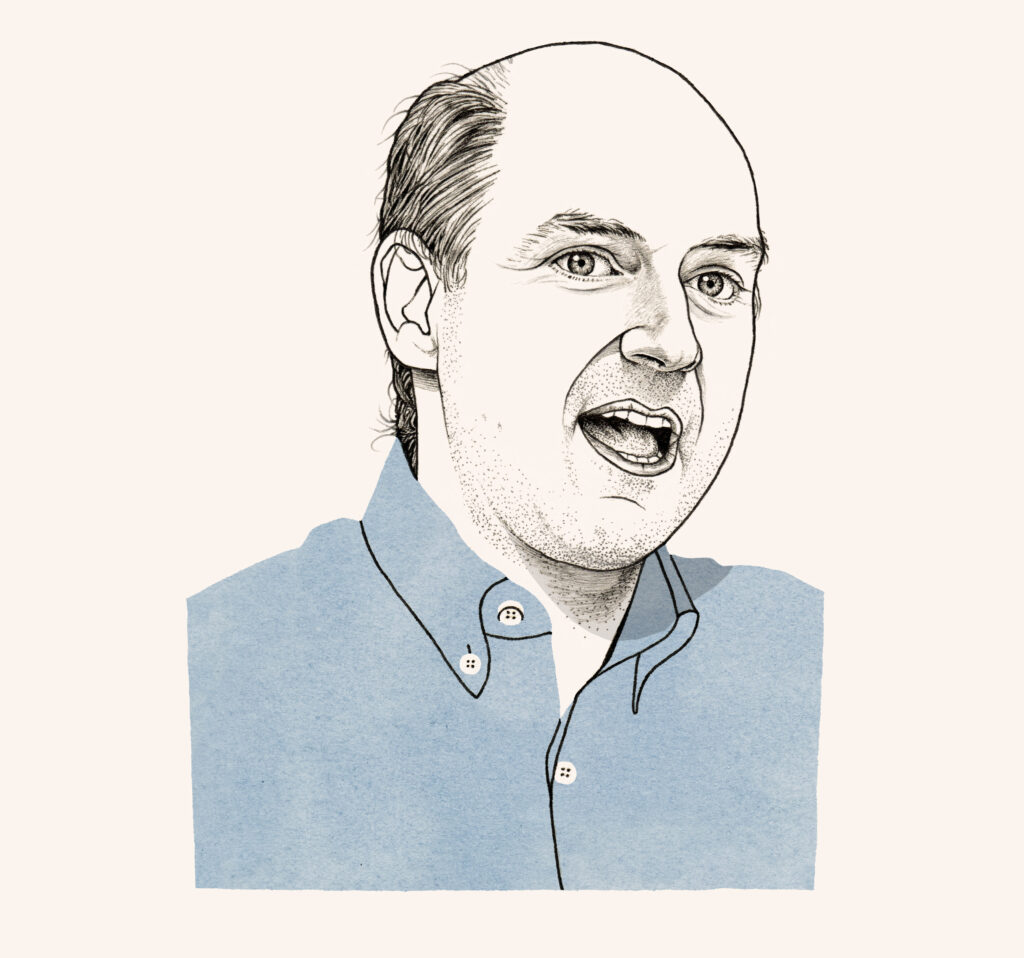 Joseph Stout’s academic career, ultimately, comes down to the marriage of science and philosophy.

“The things that we think of as abstract or untestable and ethereal, I see as testable and the beginning of a good question,” says the lecturer of biological sciences.

Often, he says, “I’ll propose a question to my students that sounds rhetorical, but that I actually want an answer to. How does art get you more food or babies? Why did we paint in the caves? What does art do for us, evolutionarily?”

In a roundabout way, Stout became a scientist — first he studied philosophy, seeking to understand humanity through that discipline. “I’ve always been really interested in how humans think about things. But the problem with philosophy is that you don’t get answers. You just learn how to ask the questions. There’s no evidence or data on which to draw conclusions.” He craved something concrete. So, he returned to biology, an early love, to better understand the human condition.

Stout started his career looking to teach invertebrate zoology. But when he arrived at FDU, most of those courses were spoken for, and he had to recalibrate.

“At FDU, I’ve had a lot of freedom to develop classes that make me excited.” His favorites, the ones he refines and teaches year after year, are Human Evolution and Darwinian Medicine.

By chance, Stout discovered old models of early human skulls, tucked in a closet at FDU. He also found some small stone tools. Originals. The treasures piqued his curiosity.

A big piece of the two classes, which he suggests students take consecutively, is how humans got from there to here. Where did humans start, and what’s happening to us as a species now?

"I try and draw a lot of connections from science to people’s lives and to history, and then try to get students to think about things in a larger sense."
— Joseph Stout

Students in both classes get to react to the skull models and stone tools just like Stout did. They typically handle and hold the items, which Stout says is critically important to understanding function. To adapt the Darwinian Medicine course for online learning in the age of COVID-19, Stout manipulated the items on camera himself, holding them up and showing students different grips and how his fingers fit. Human Evolution is usually a fall semester course.

“The Darwinian Medicine class looks at how the modern world — and our industrial diet, cubicles and stress — contrasts with the last two million years of human physical evolution. I particularly focus on the changes that have occurred within the lifetimes of students, their parents and grandparents.”

Stout also uses his classes to challenge long-held evolutionary and historical theories. He encourages students to question narratives and draw their own conclusions, based on scientific evidence. For instance, once Stout held them, he realized that “stone tools probably had uses other than just cutting and slicing. Some seemed to be designed so that you could hold the tip and throw it like a knife.” Intrigued, he started to formulate a theory that throwing shaped human evolution, from hunting strategies to fighting other humans for resources. Stout even tested throwing with an axe approximately the size and weight of a baseball, using a police radar gun to clock speeds.

“All I had was an axe in my hand, and I started thinking about throwing. I think like a philosopher and work like a scientist.”

His charge to students is thus — challenge accepted facts with new evidence. Get curious and ask big questions. Seek to understand humanity and find a place in the world.

Stout has discovered that for shrimp, “Dopamine is not a stimulant. Dopamine is a reward.” He conducts this research independently, with support from student assistants — they count the movements of the crustaceans. “What I like about shrimp is that I’m able to ask a simple question and get a simple answer.”

“My mother would’ve called a marsh my natural habitat,” says Stout. “I spent my childhood staring at pond water.” That pastime came back around when he worked at the New York State Museum in Albany and received a grant to map frog species. “I spent a summer driving around and catching frogs.”

“I love that with science I can find out something new. I can make a hypothesis and test it. I can find out if I’m right. And that breeds a feeling of accomplishment.”