When University Trustee James Orefice, MA’91 (Metro), decided to earn his master’s degree in political science at Fairleigh Dickinson University, he was already a commodities trader on Wall Street. Through his work, he had come to understand the ways in which even small shifts in the global landscape could have enormous consequences for world markets. 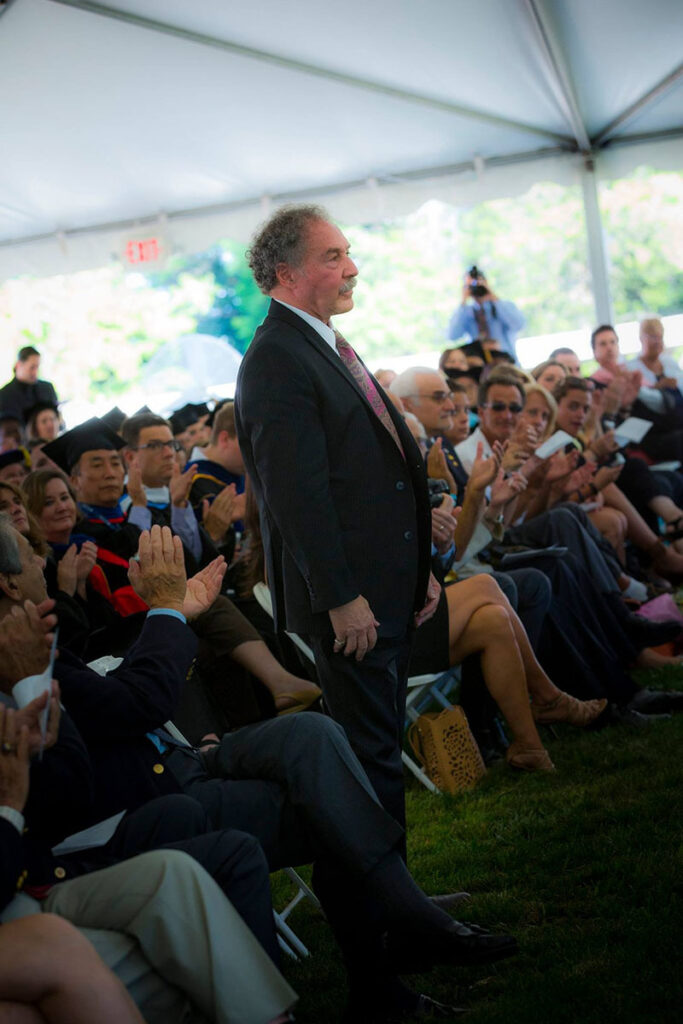 Alumnus and University Trustee James Orefice, MA’91 (Metro), has a long history of giving and support of student scholarships. Pictured here in 2016, he’s being recognized for his generosity. (Photo Roy Groething)

But he decided to attend graduate school not because he thought it would make him a better trader — although it did — but because he was curious. Orefice, whose undergraduate degree from Widener University is in history, says that, as a trader, he spent his days poring over The Wall Street Journal and the Financial Times and charting markets to determine the supply of and demand for the precious metals he traded.

“Graduate school was fun,” says Orefice. “I did it at night so, it took me a few years, but I really enjoyed the courses and the professors. It also helped me anticipate trends and make business decisions. It taught me to think and solve problems.”

Orefice remembers several professors in particular who challenged him in ways that made him a better, more insightful trader.

Orefice’s path to Wall Street and to FDU was anything but direct.

When he graduated from college in 1971, he recalls, the country was in the midst of an economic slump. So Orefice decided to work his way around the U.S., with stops as a hand on a cattle ranch; as a laborer in a meatpacking plant in Denver, Colo.; and as a mobile home mechanic; before opening his own commodities firm in Dallas, Texas.

From Dallas, he made his way back east, secured a position as a floor clerk on Wall Street and, eventually, bought membership to trade precious metals and crude oil.

Even as he zigzagged toward a successful career in the high-pressure trading world, he never lost his passion for learning.

"Giving to FDU is giving someone the means to obtain an education."
— James Orefice

That commitment to education became the impetus for a $2.5-million gift to FDU made by the Orefice Family Foundation as well as Orefice’s decision to include the University in his estate plans, some of which are earmarked to support scholarships and programs at FDU’s School of Public and Global Affairs.

“Giving to FDU is giving someone the means to obtain an education,” Orefice says.

Orefice, who hung up his trading jacket in 2010, now splits his time between homes in New Jersey and Florida and manages commercial and residential real estate.

He says that although he worked in the private sector, he strongly supports students who choose a career in public service. “Anytime you can join a nonprofit or public organization you have the chance to turn a negative world into a positive one. Giving back to the community turns a zero-sum world into a pro-sum world,” says Orefice.

Previously, Orefice’s generosity allowed the University to establish the Orefice Family Scholarship at FDU. The scholarship supports undergraduate students studying political science and international studies. The Orefice family has also contributed matching donations to the 42-hour Challenge, now known as the 42 Hours of Giving, a fundraiser named in honor of FDU’s founding in 1942.

One University Many Dreams
Support FDU